What’s up guys, I am back with another review today. We’re taking a look at the brand new NECA, this is the retro cloth material, we’ve got the soft goodies on this outfit. We have the 2018 Michael Mayer, which is based on the 2018 film. Michael Meyers figure again by NECA toys, you can see right there in Neca Real Toys Miramax, such a great looking figure. This is a second Michael Myers 2018 figure we’ve gotten from, NECA has the ultimate one which we’ll do a comparison at the end of the review.

Love the packaging on it; it’s all black, and then the figure on the back looks fantastic. You have a little bit of a read up right there on the bottom for the new film, it says it includes hammer and knife, would’ve been cool if he included a pumpkin to go with this. The side of the packaging you will see Michael Myers face with Halloween, and the movie poster image there, the same thing on another side. The top is just Halloween, but again, I’ve been saying this a lot that I’m not a box collector. Still, because of how cool this looks, this is definitely something that would look great just in package alone.

So let’s go ahead and open this up and take a closer look at Mike. Taking a look at the accessories that he does come with, he has a knife, a bloody knife. Look at the detailing on the handle, and you have the bloody knife, which is a little bit sharp, as I always say, be careful with the kids. You get the knife, and you also get a really cool hammer as well, you can see the little bloodstains on there the wood finish on the hammer, looks excellent. He doesn’t come with any base, no tombstone, or no pumpkin. I think it’s a missed opportunity for NECA; I think it would have been cool to included extra accessories, but let’s bring out Michael Myers.

Alright, guys, here we have Michael outside of the packaging, and he looks incredible. You can see the great sculpting that NECA did, I don’t think you can see any eye holes in here. They look pretty much just painted black, this is really good, really detailed and well compare to the second with the ultimate. To see which one is the better of the two, I’ll go all the way down to the next, you can see the detailing. There is the hair, it’s all sculpted in, it would be cool if they give us like like a material type hair.

The jumpsuit on him is what really makes this figure pop, this is what I think a Michael Myers action figure should be is a cloth material. Even if you’re not a retro-style collector. Look at the boots, look how great they look, there are no peg holes at the bottom which is unfortunate, I would have preferred peg holes so I can get him to stand on those NECA bases, but not a big problem. I’m gonna see how high the boots go up, they’re not full boots, they end right at the ankle there, but they are really nicely detailed.

The left-hand does have a little bit of battle damage there, you can see some blood dripping down the hand, and there’s the palm part in the hand. This one has a closed hand, where you can place the knife or the hammer. If you look at the outside of the hand with a knuckle area, you can see he does have some wounds. With some blood on the top of the hand and knuckles. But the outfit itself looks fantastic, he does have a blue shirt on it, underneath the jumpsuit you can see a little bit of us stitching on the uniform. Still, this mechanic suit definitely makes this figure look ten times better. Such a fantastic figure, it’s so crazy how just cloth material can make an appearance look so much better.

Let’s go ahead and have a look at some of his accessories. Here I have Michael Myers holding the bloody knife, it’s a perfect grip and not loose at all. So, you can definitely display him with this knife, and it will just look insane, look how crazy that looks the blood. I absolutely love it!

Let’s make some comparisons, comparing both Michael Myers, the ultimate 2018, and the brand-new retro style. To be honest with you, the 2018 retro looks a hundred times better. The paint applications on the mask look a lot better if you look at the head sculpt of the one on the left. It seems to be a little bit taller as far as the mass goes. Looks at the detailing on it, the hair looks a lot better, in summary, the better head sculpt. I’m gonna give it to the retro cloth Michael Myers on the left.

Here is a little bit of a comparison side-by-side comparison with the ultimate versus the retro style cloth Michael Myers. Look at the difference, look at how great the one on the left, much better. And it’s cloth outfit would make a significant difference in the figure compared to the sculpted one. Overall I think the mego style retro figure is 10 times better, the mask is better, the outfits better, the paint application is better as well.

You can use the pumpkin that comes with the ultimate figure that lights up and display it with your brand new retro Michael Myers. That adds more to the actual appearance. Again, overall, my thoughts on this guy is definitely a pickup. The only thing I think NECA missed out is just a couple more accessories. I know a lot of the Mego figures don’t come with a lot of accessories. Still, I think at least a pumpkin, another light-up pumpkin would have made this figure a whole lot better. Or even the officers head since we got one that the severed head with the ultimate if we would have given this another severed head, but this one with the light-up feature.

You guys let me know this a pickup in the comments below? Is it a pass? Which is better? The ultimate figure even if you’re not a retro-style figure collector, which one is better of the two? Let me know down below guys, thank you for watching, we got a lot more hoar figures to review in the next, we’ll see you soon. 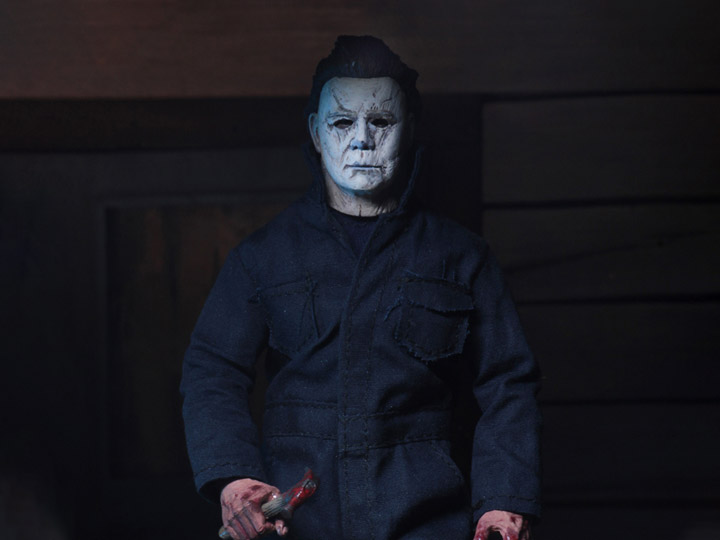 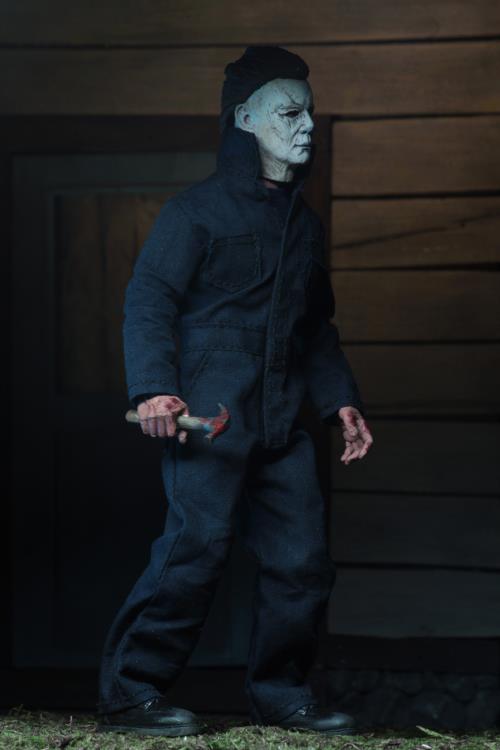 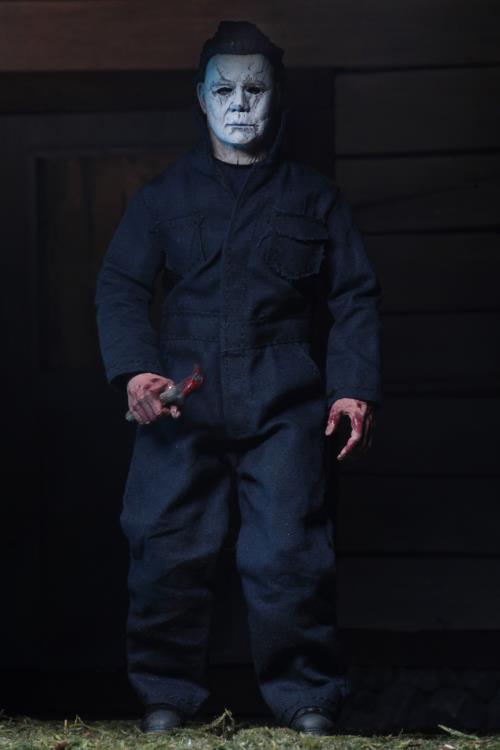 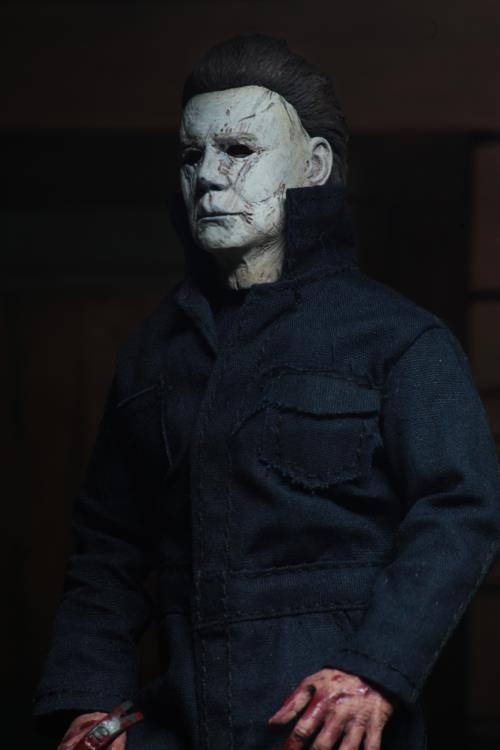 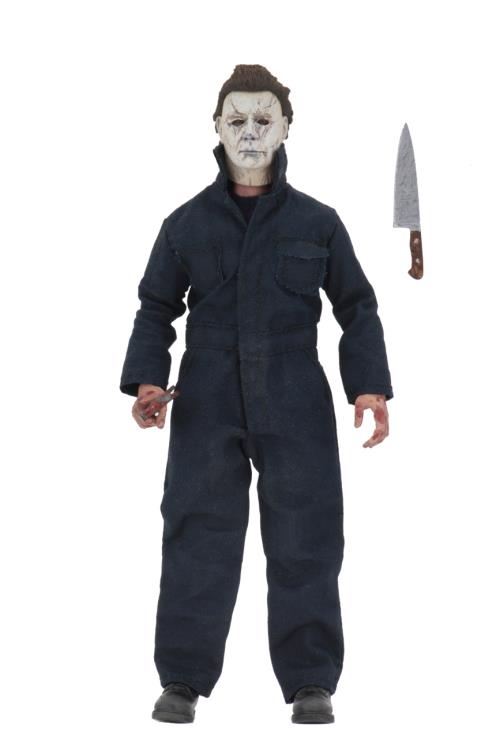