Hello, everyone, and welcome back for another showcase review. This time we have the only Scarlet Spider, which is one of this year’s Toy Fair exclusives. For sale at ACGHK (Animation-Comic-Game Hong Kong), I could not be happier to be taking a closer look at this guy.

So without further ado, let’s get this guy out of the box. Here we have the Scarlet Spider standing up just like you’ll have him straight out of the box, and this thing looks absolutely amazing, what makes this guy really special, I think, are his eyes. Yes, he does not come with swappable eyepieces. But, he does come with this clear lens that is actually in front of the white honeycomb pattern eye. And that adds so much depth and realism to this figure. Its colors on this guy are something else as well. A red and blue really pop in comparison to the advance suit, which I feel doesn’t really have as much of a vibrant color scheme as this guy does have. The suit as a whole looks like it was ripped out from the game itself.

I’ve got him set up with his camera and coffee cup and the rest of his accessories that he comes with are really interesting and you can give them to any of your Peter Parker figures like from the MCU. I especially like how the camera has those spidey logos all over the strap and the camera lens, I like how that shines so realistically.

So to talk about the suit more, the honeycomb pattern on the sky is really intricate. But, it is screen-printed, which is accurate to the game, but it does not help with keeping your figure free from damage. The head is sculpted, and it matches the texture and the color of the suit perfectly. The sleeveless hoodie or vest actually works damn well to cover any creases you would see in his torso when you have him in poses like this. So you don’t have to worry about any unsightly marks or wrinkles on your figure.

In terms of articulation, let’s use this neat kind of ground pound pose to showcase that this pose was relatively easy to achieve actually. It just needs a little bit of fine-tuning to get it looking perfect because of the Finn Suit material you can move his arms and legs around very freely with minimal restriction, but again, be careful of damaging the screen-printed elements on this suit.

So to conclude this showcase review, this is an absolute winner for hot toys I feel, and I really hope they continue on with this Spider-Man PS4 line, this suit is much more comic style. Still, if you’re a fan of the game or the comics or even a Spider-Man fan like myself, then I would not hesitate to pick this guy up.

Guys that’s the review, let me know what you think in the comments below. 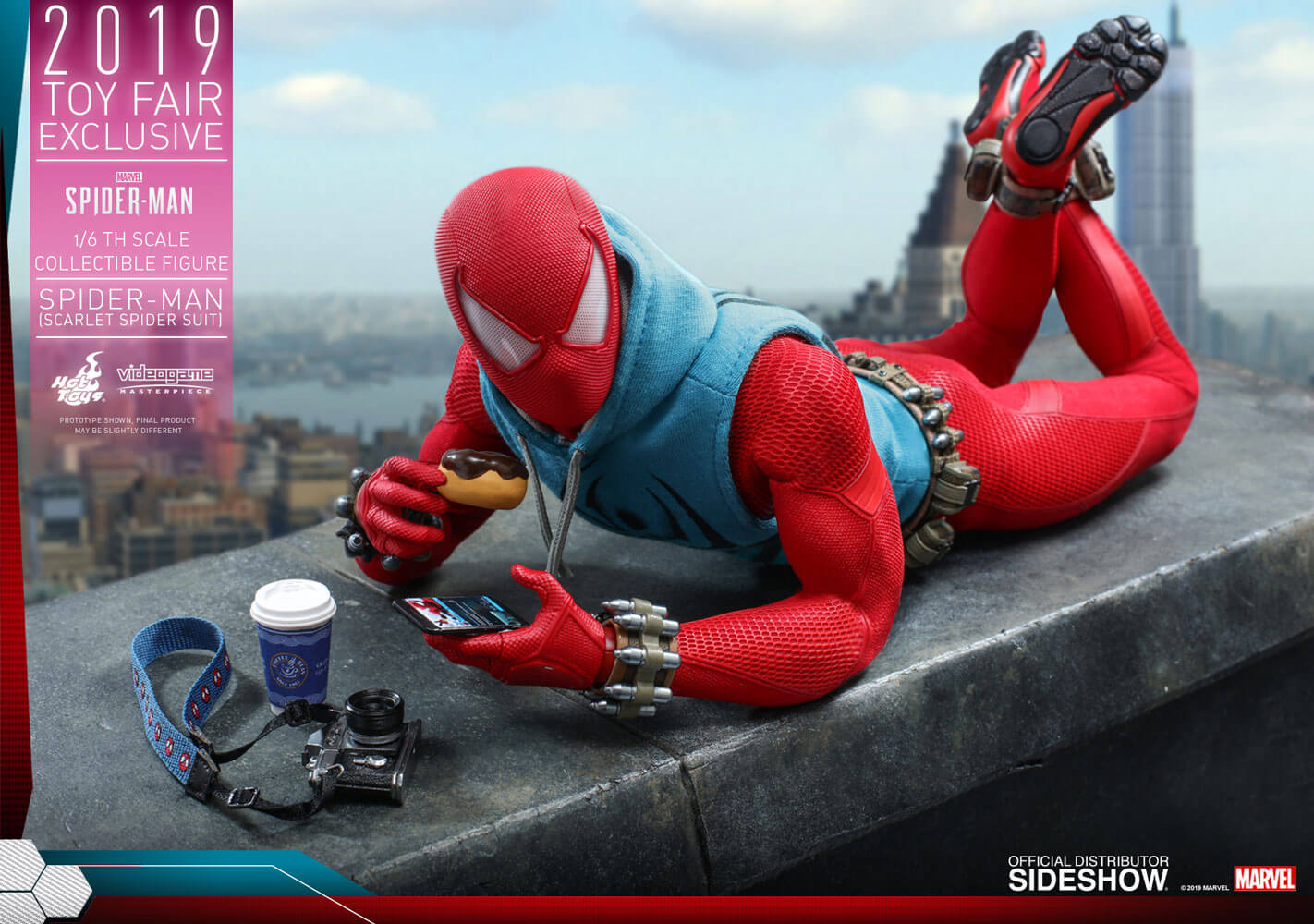 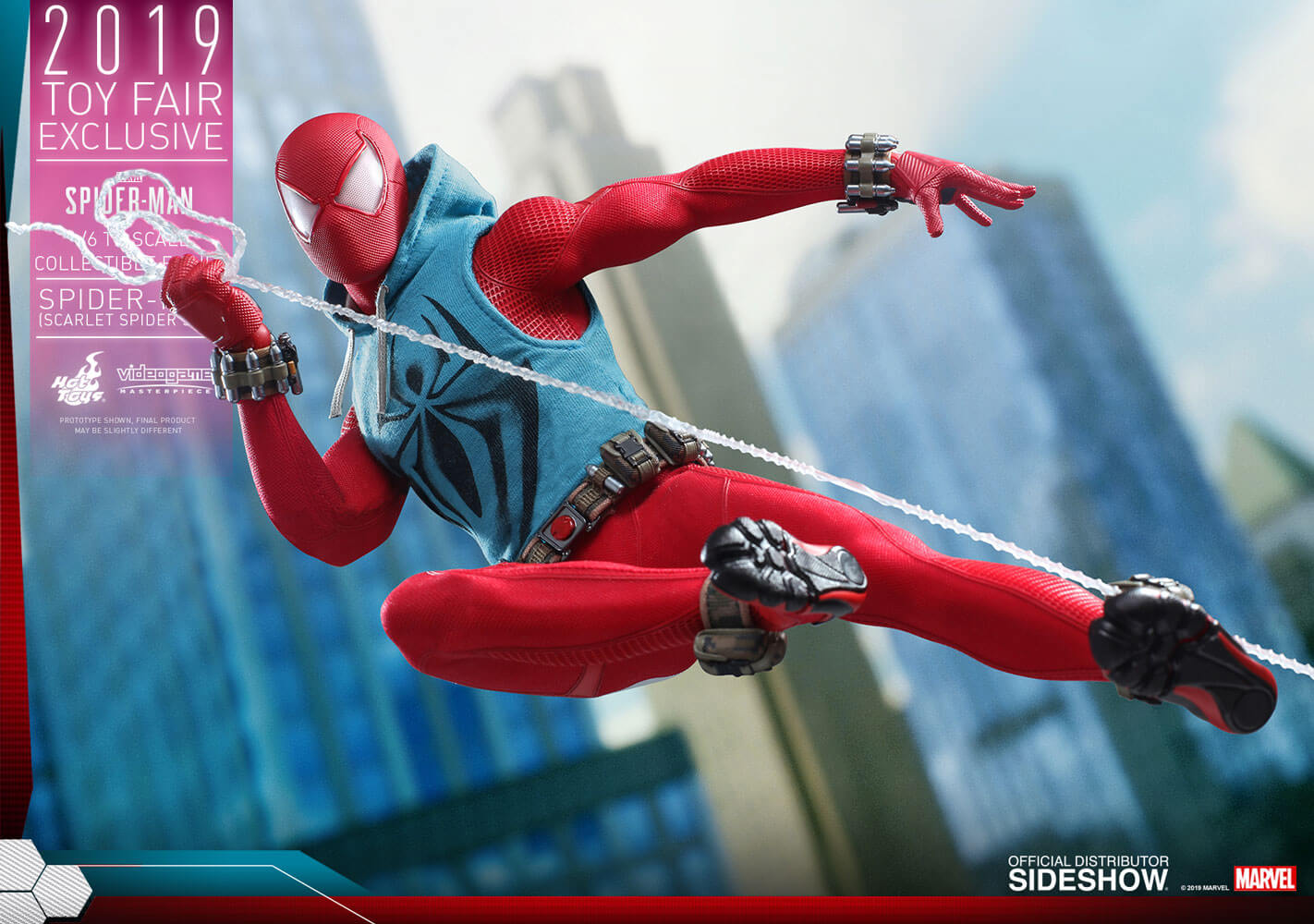 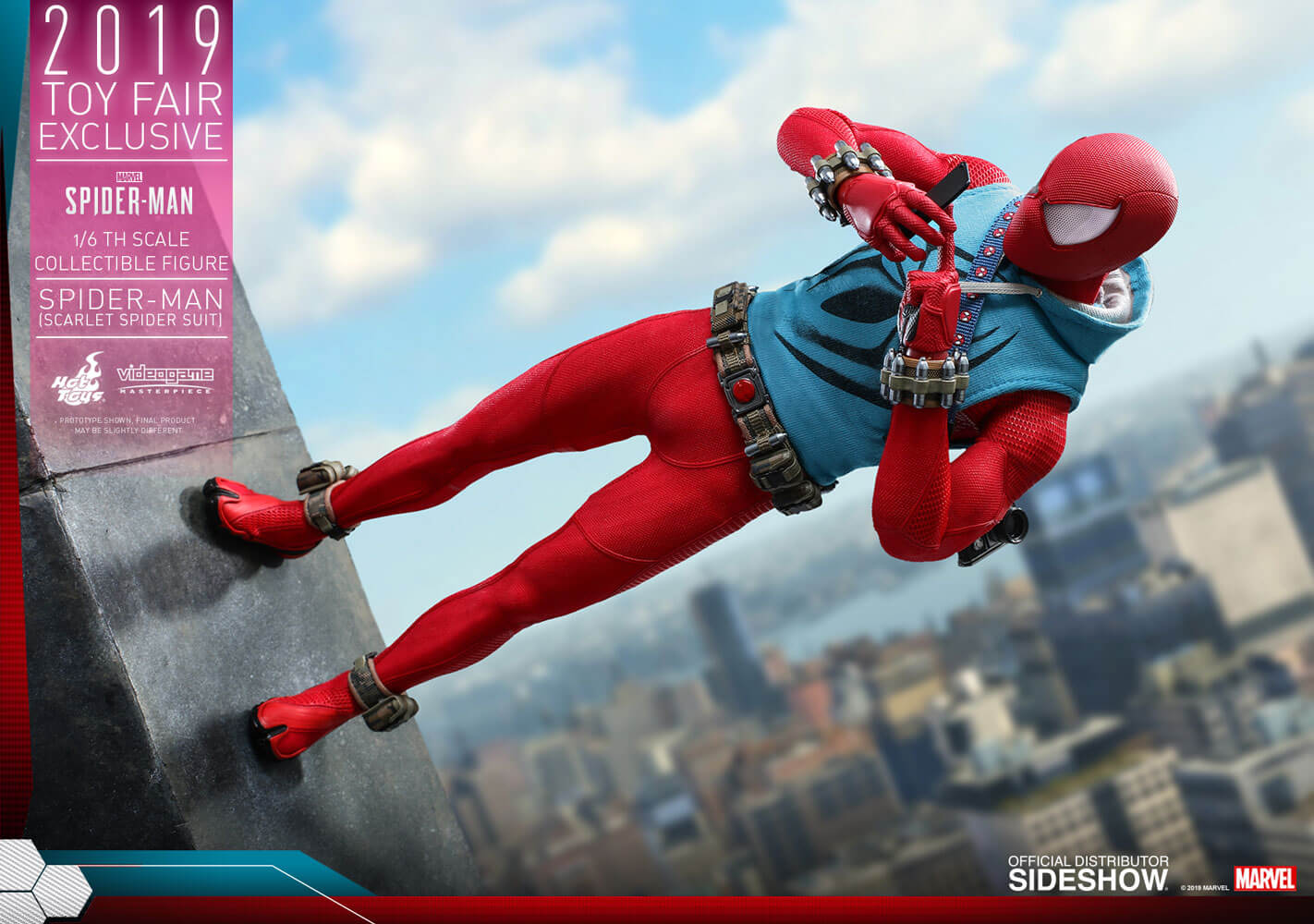 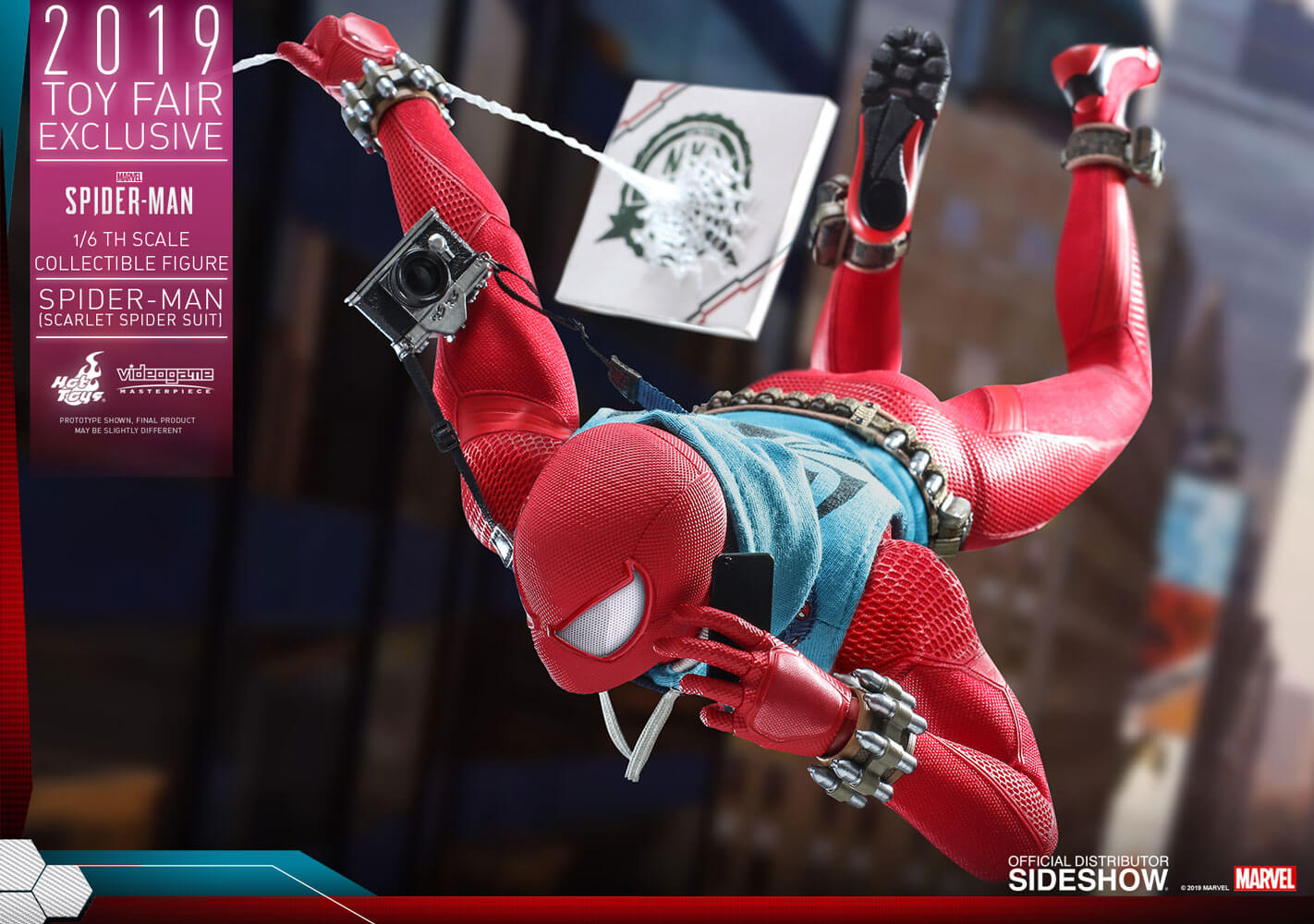 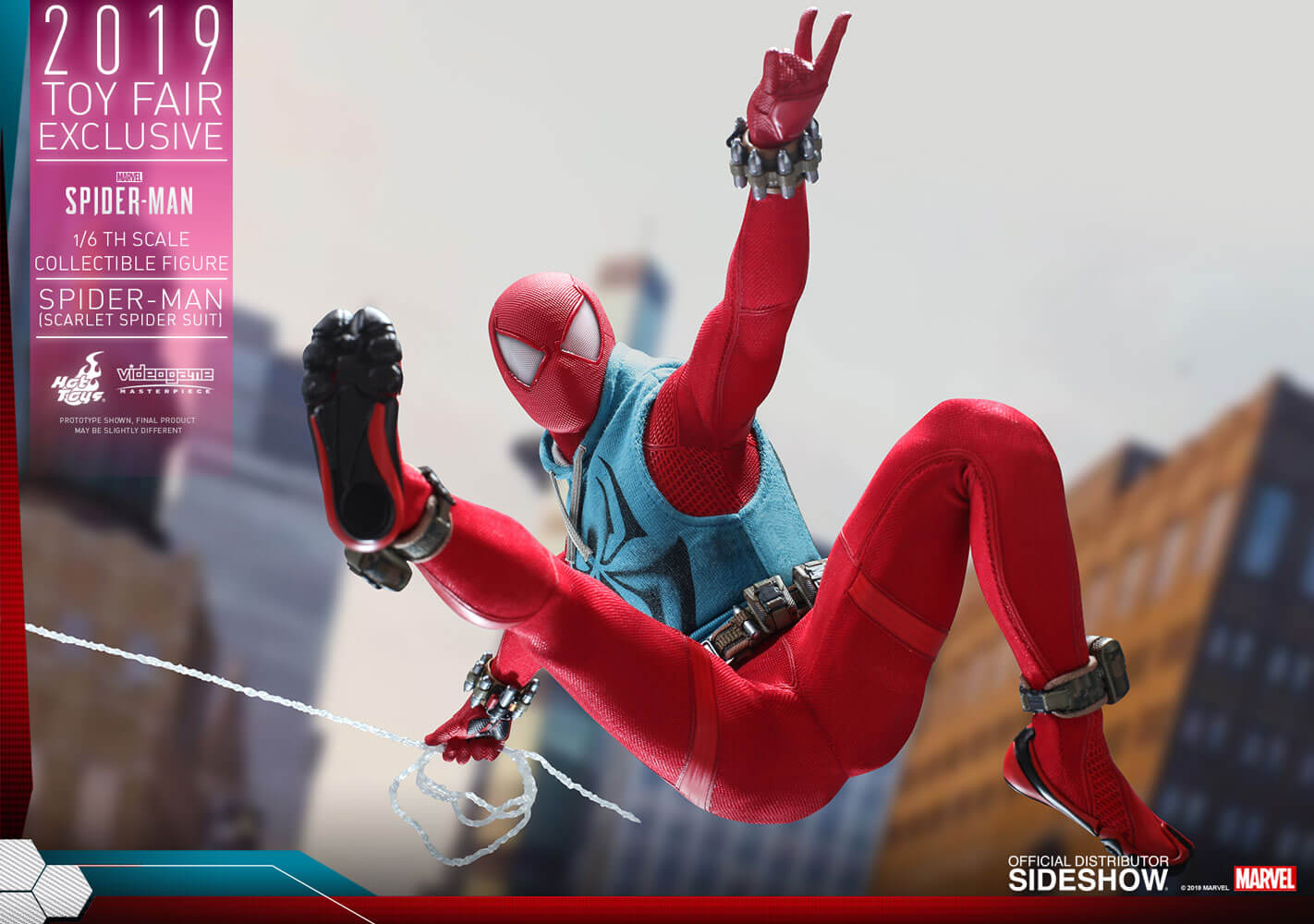 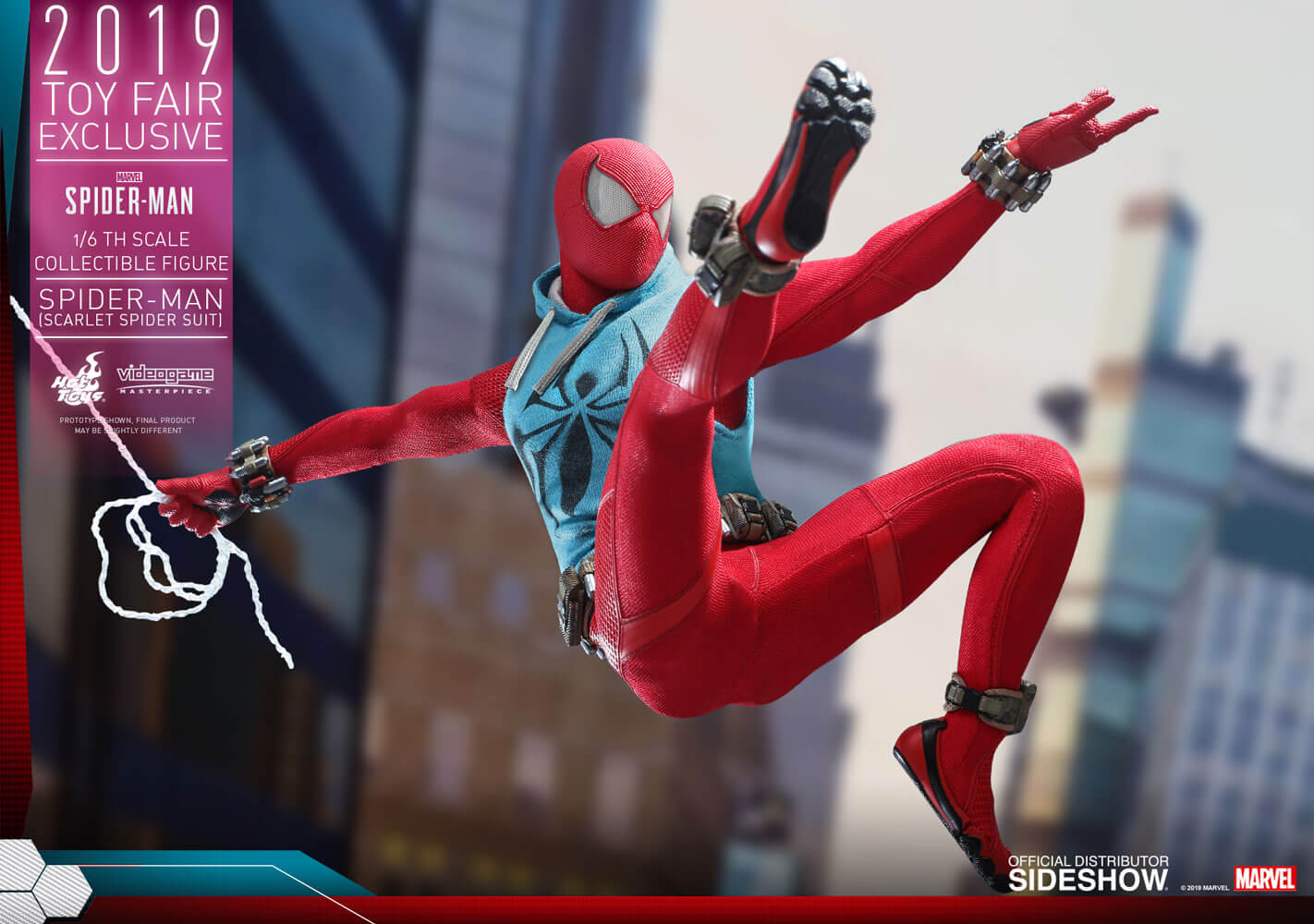 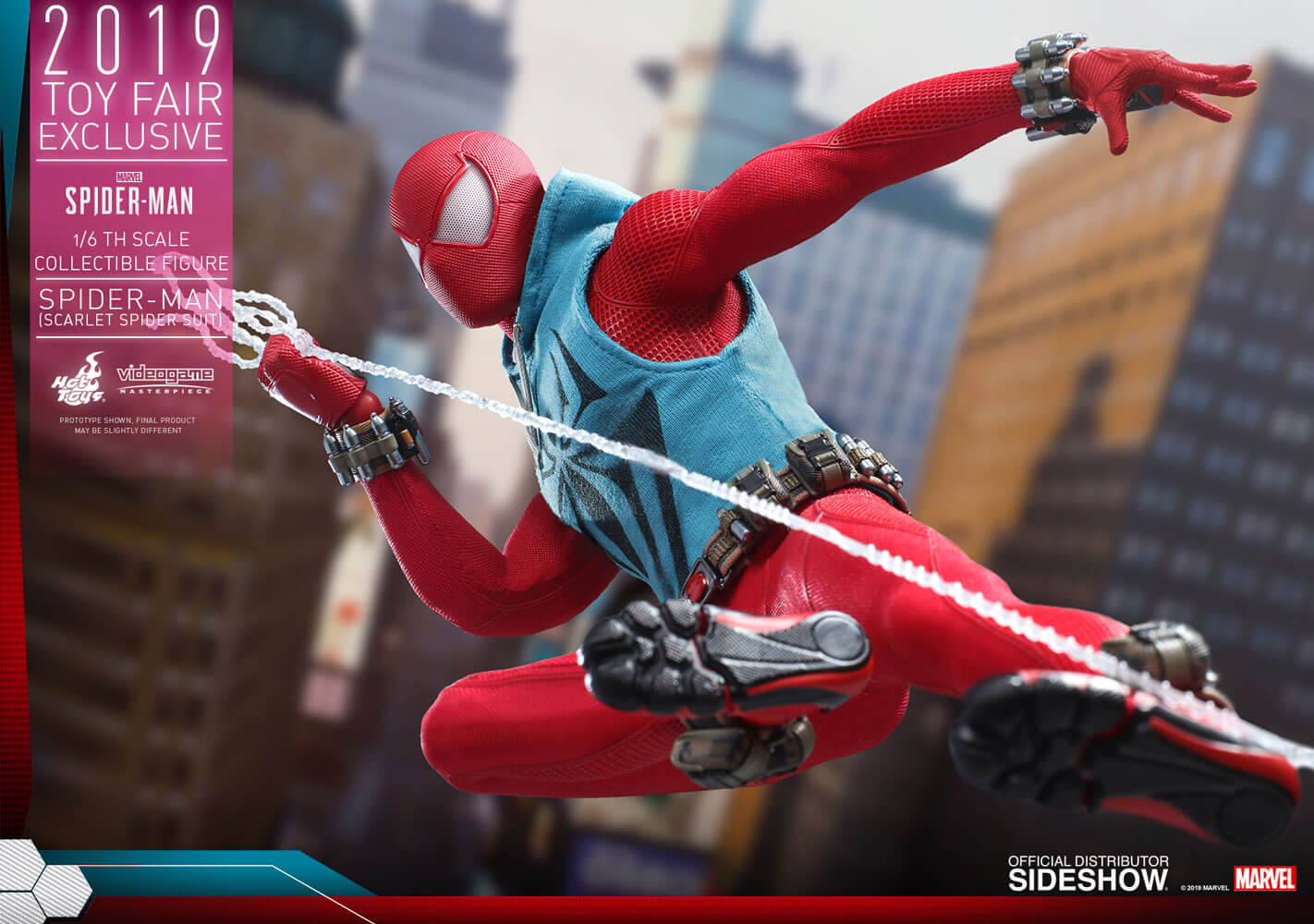 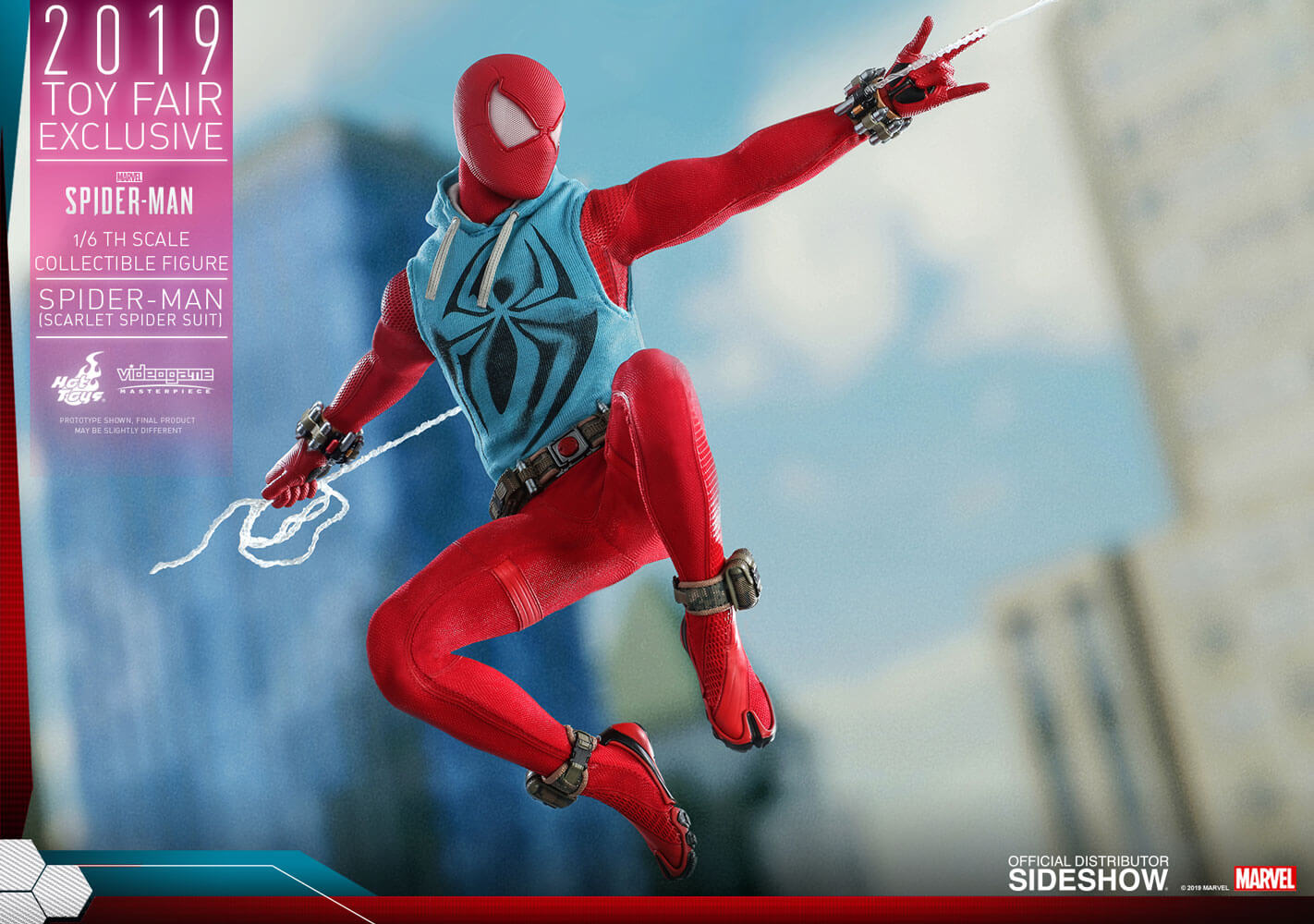 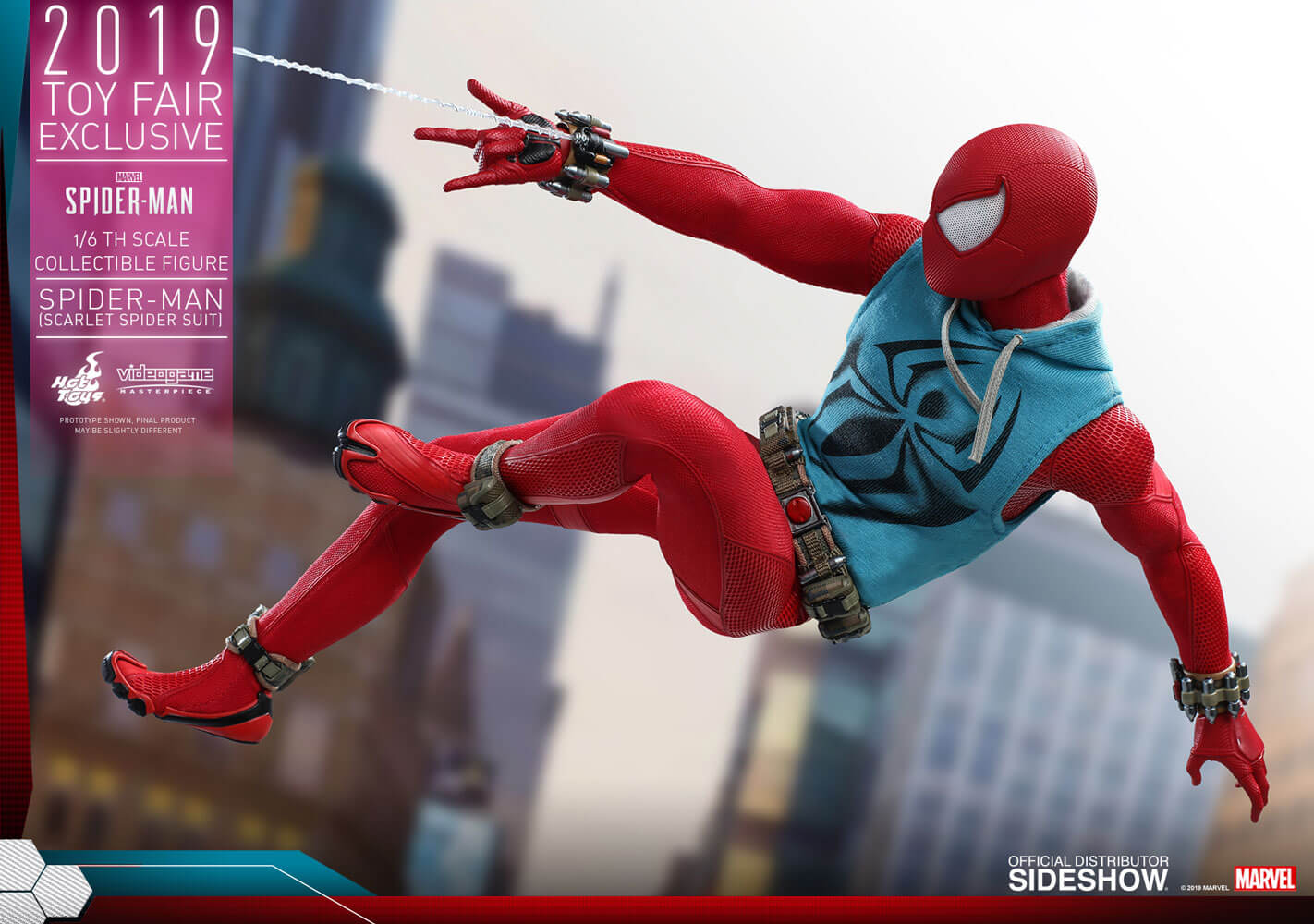 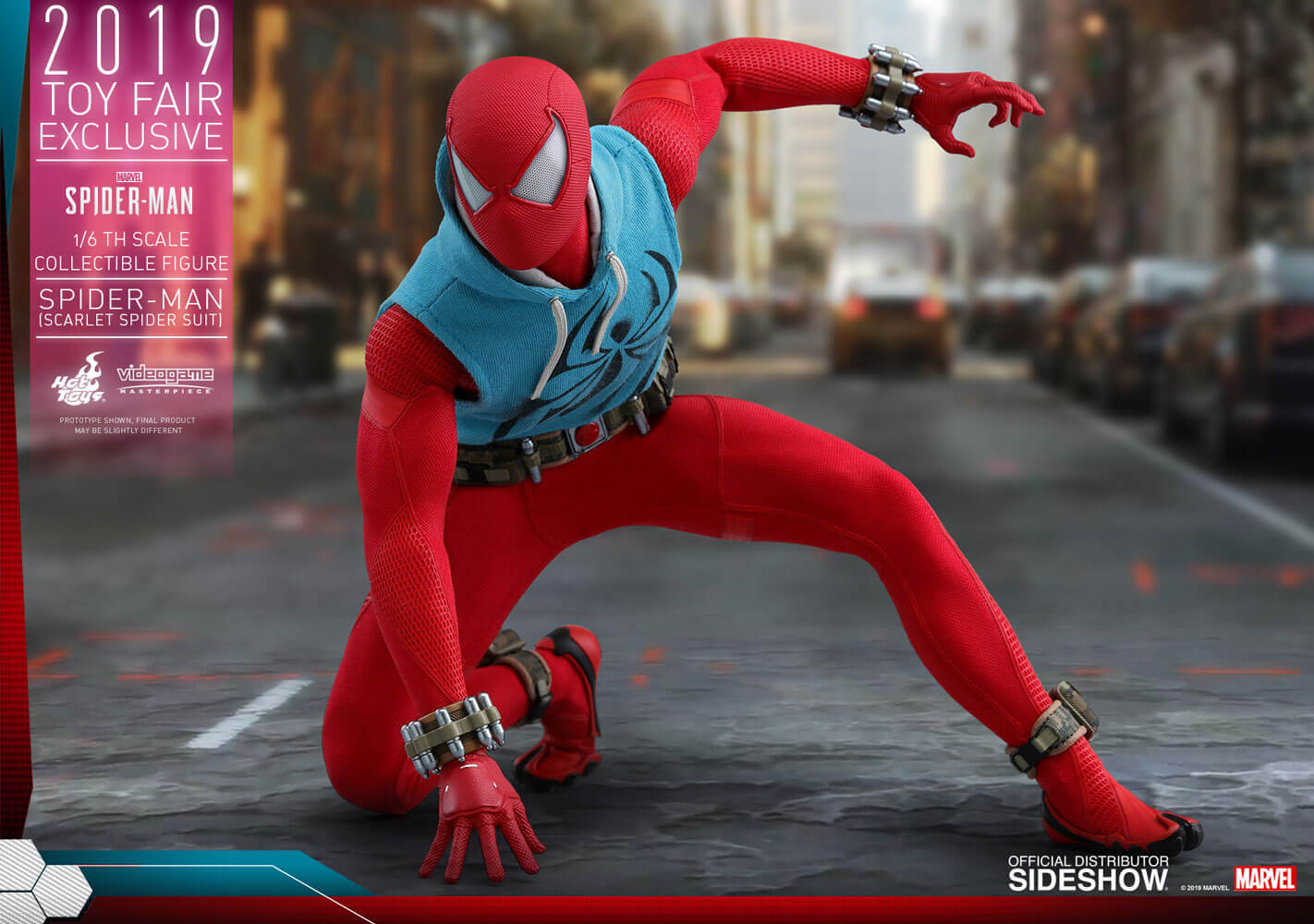 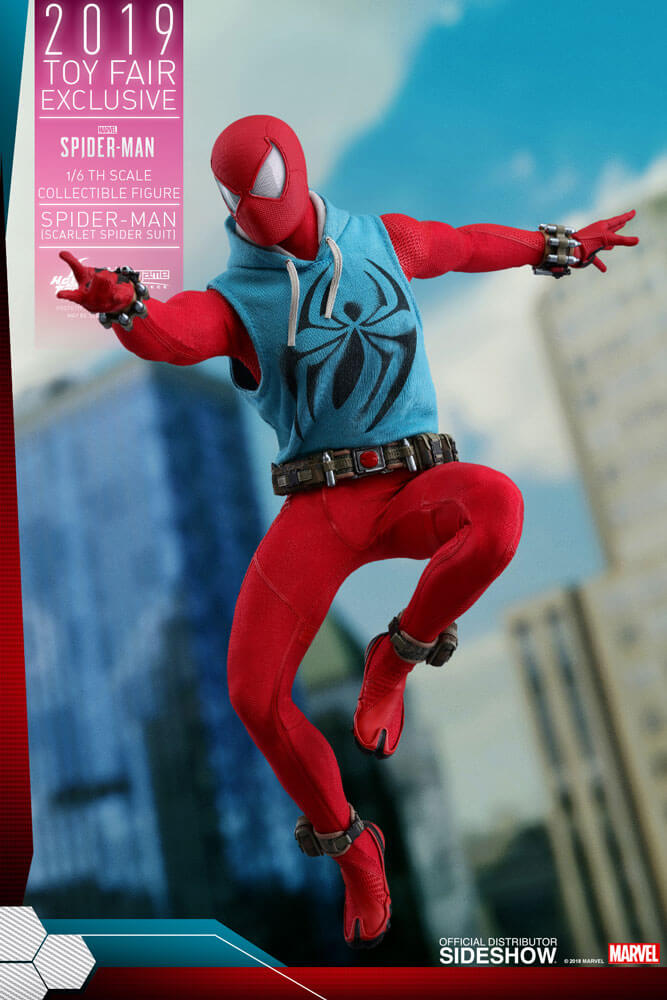 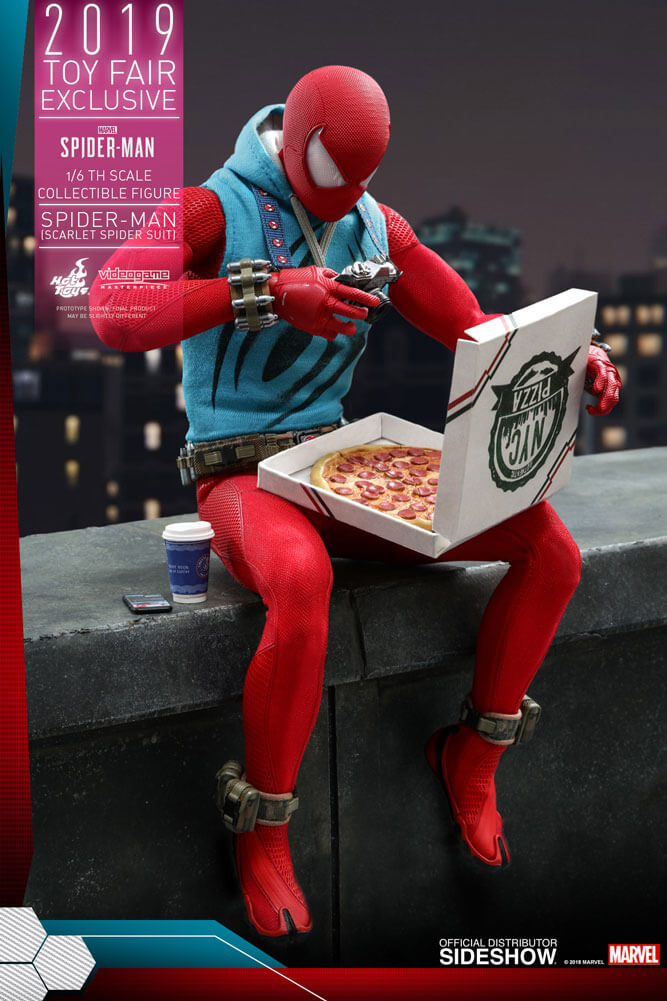 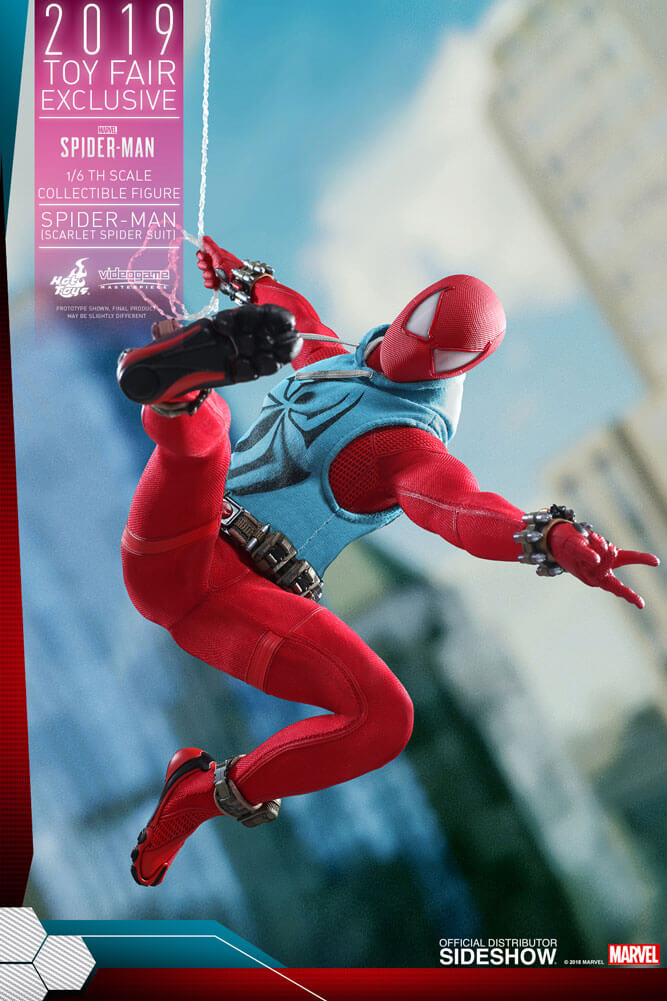 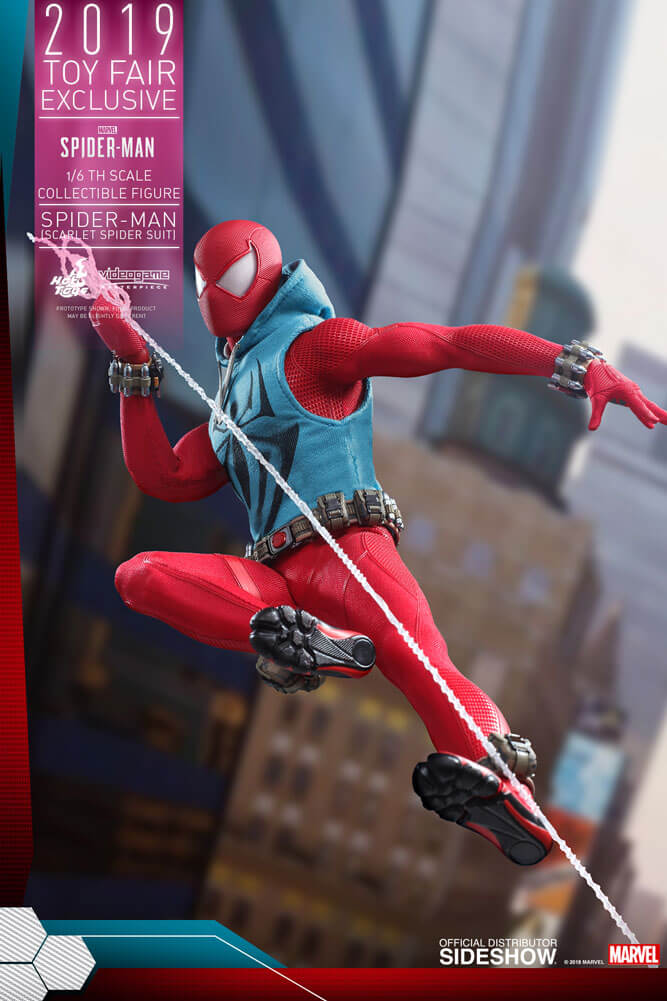 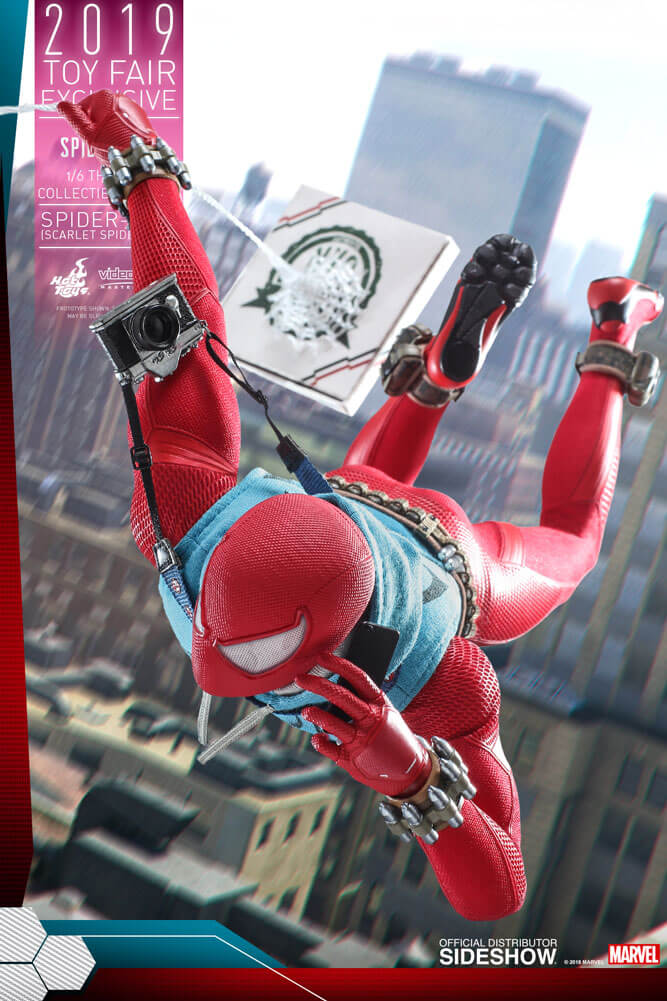 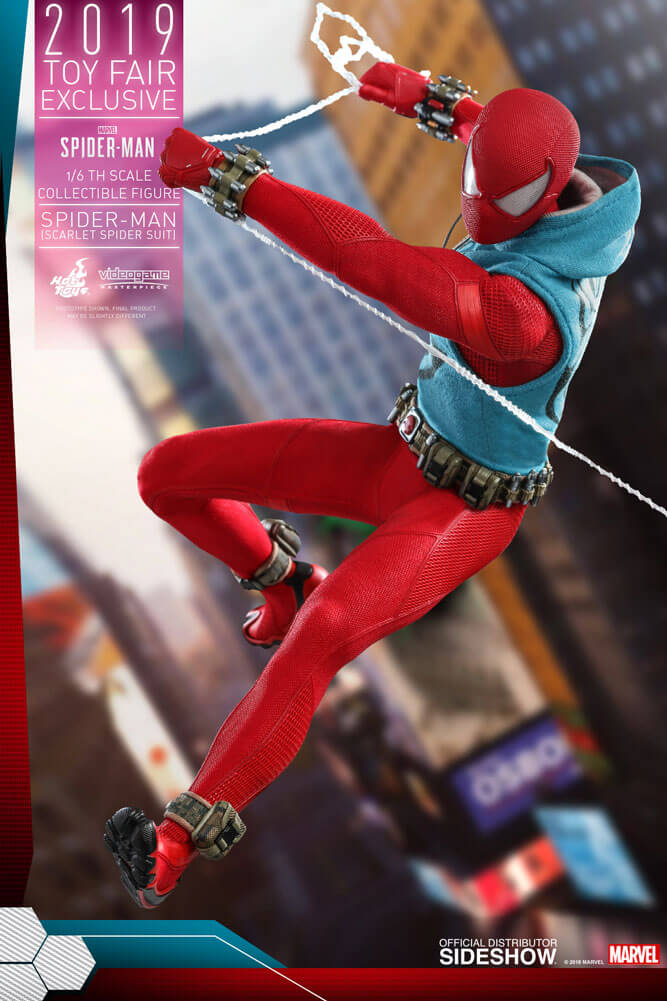 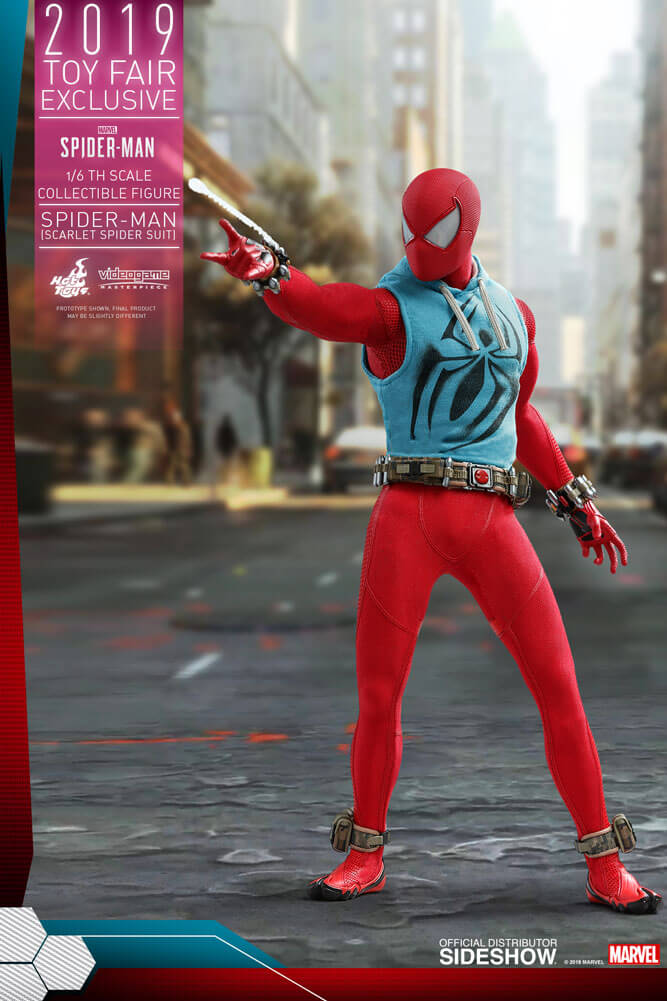 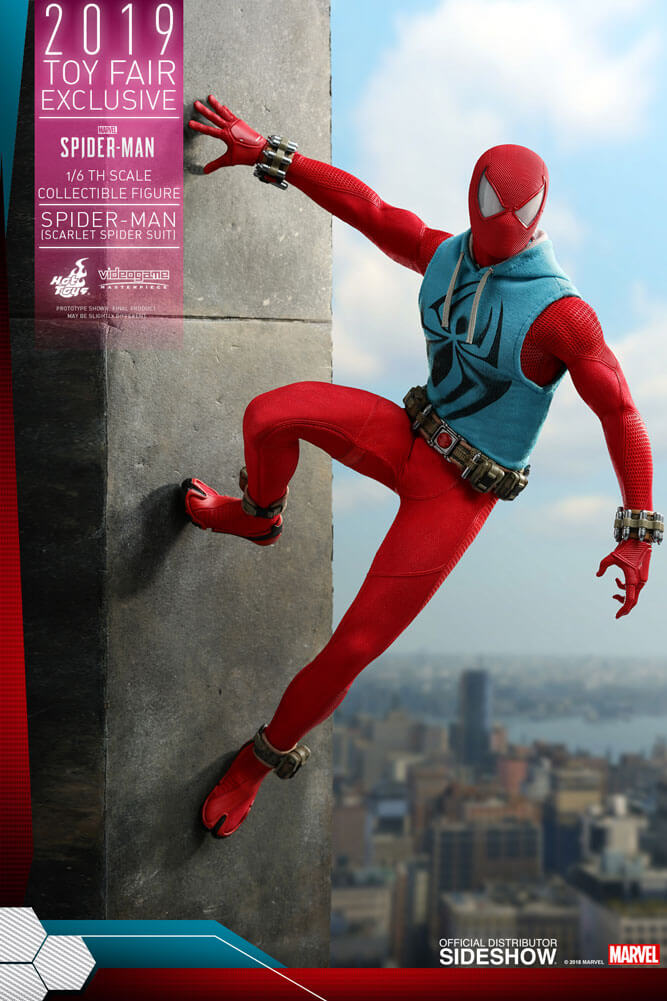 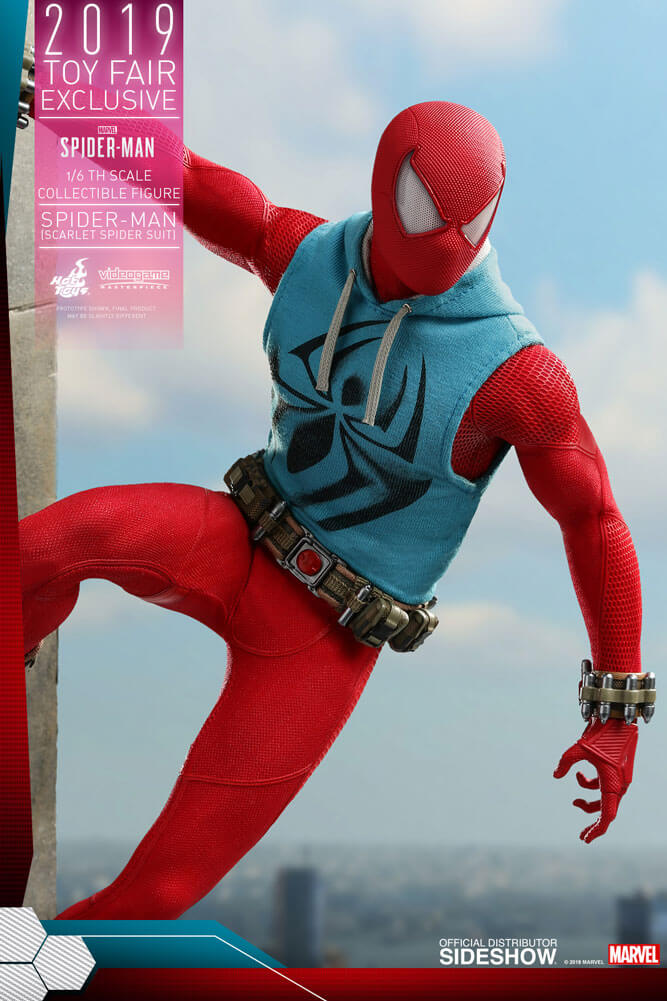 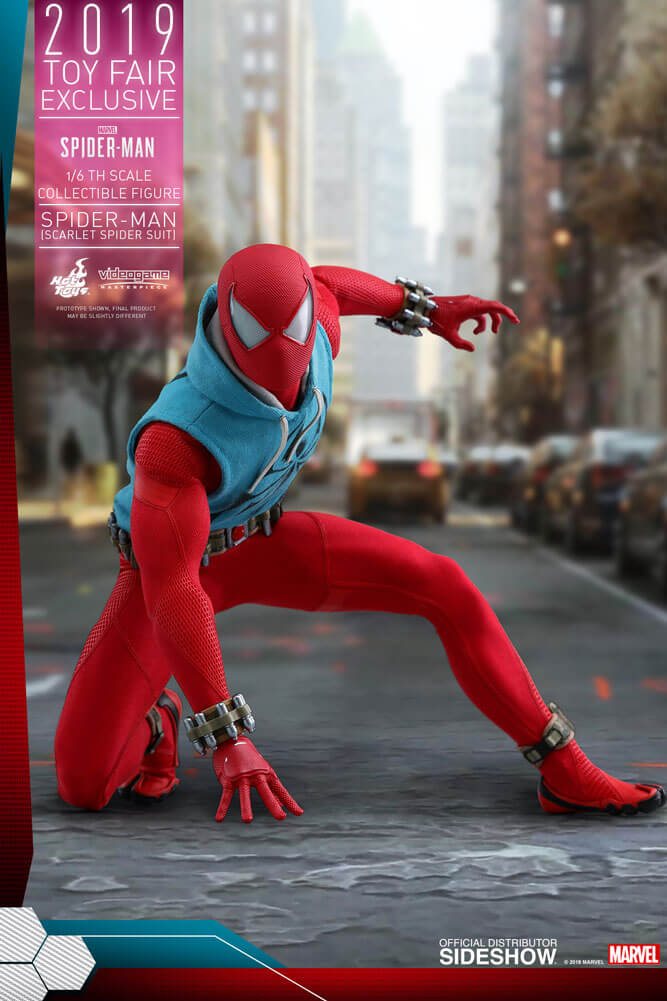 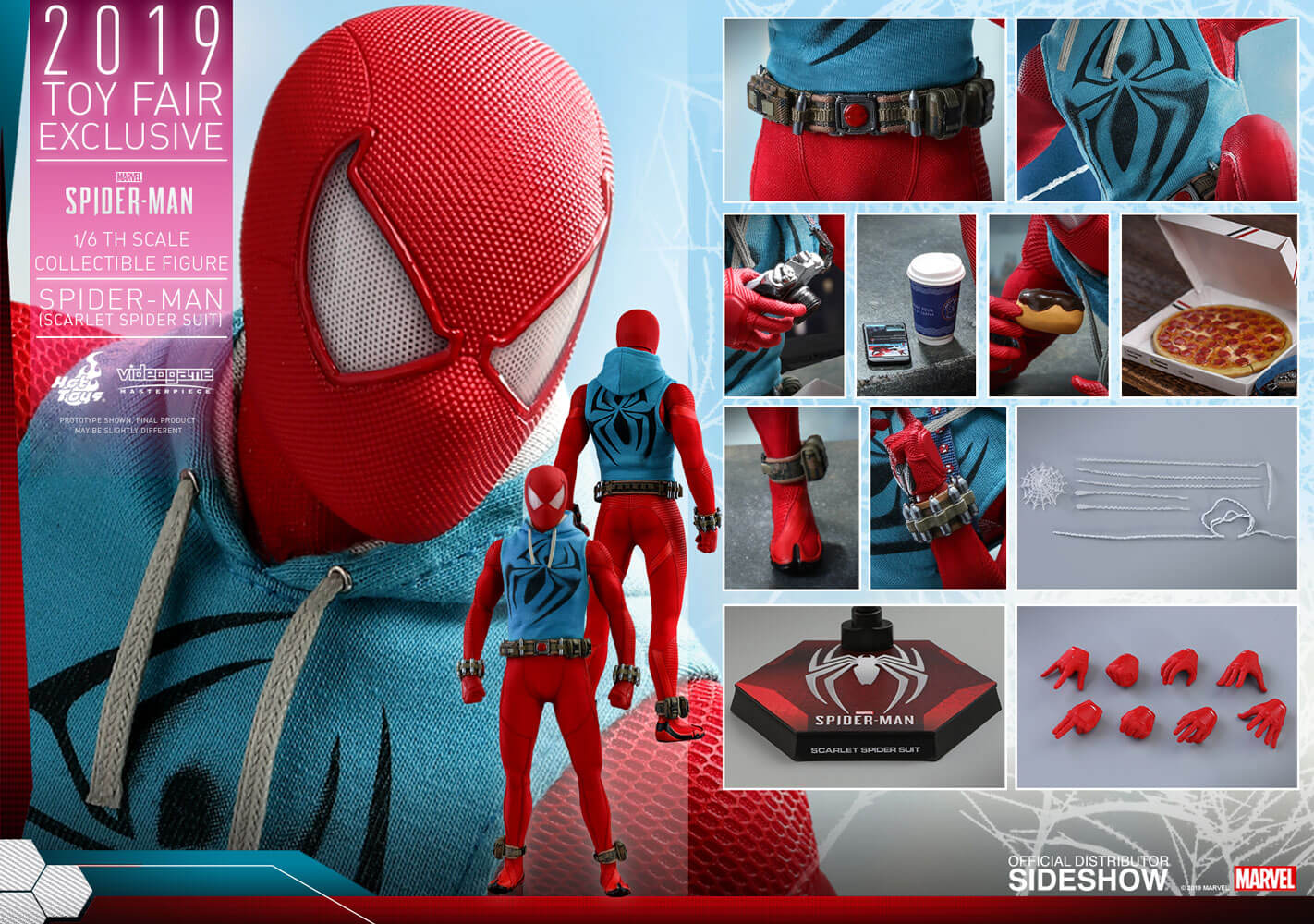 Marvel’s superhero Spider-Man is on an exciting adventure! Jumping, crawling, web zipping, wall running and swinging across New York’s rooftops in Marvel’s Spider-Man video game! To save the city from new villain threats, Spider-Man must rise up and be greater. With a large variety of suits to choose from in the critically acclaimed game, fans are able to enjoy the wall-crawler’s adventure in their favorite outfits!

Thoroughly crafted based on the Scarlet Spider Suit from Marvel’s Spider-Man video game, this sixth scale collectible figure features a newly developed masked head, a skillfully tailored sleeveless hoodie with detailed Spider-print on both sides, utility belt and Web-Shooters, interchangeable hands for different postures, a camera, a pizza, and a variety of web accessories as well as a stylishly designed figure stand!