Today we’re going to be having a look at the Matrix Neo figure.

Now the first thing that he comes with is one of these dynamic display bases. I’m not a huge fan of how big these things generally, but I am a fan of the print that they’ve got on top being the floor from the building at the end of the film when he goes and rescues Morpheus. I do like obviously that the nameplate printing on them. I do wish they went back to the silver metallic nameplates, but this will do the job.

He does come with a ton of weapons. The first ones that we’re going to take a look at are his M16. They look good, and it looks nice in terms of the dry brushing and the paint effect, no moving bits on this, unfortunately, except for this one little flat piece that does come down. Still, it does look nice. The paintwork is excellent on that does look like a metal gun.

It also does come with MP5, the only sort of movable piece on this. I think it is the magazine, the paintwork on that is pretty darn good as well, it looks incredible.

Here come with these. I don’t exactly know what these weapons are calling. But, the magazine does remove on them, and there are little bullets in there as well. I probably should have mentioned that with the MP5. There’s no other moving bits and pieces on these. I know a lot of people do like the moving bits and pieces on the guns. But, these are pretty static, but they do look good, and I will have him all outfitted up with all his weapons, and it’s going to look awesome.

These little Uzi pieces here the magazine detaches on that, and these are nice. I’m pretty sure we’ve seen some of these weapons before let me know where or when we have seen these, but these are nice little weapons as well.

And the final guns are these dual M9s with the working slide and also the removable magazine, which is incredibly hard to get out without destroying the plastic. So I’m not going to try, but they do come out if you want to reload Neo’s guns, and you can see the paintwork on that is nice as well.

I like the array of weapons that Neo does come with it. He also does come with his duffel bag, and you could well store some of the guns in the duffel bag if you wanted to, you could remove that foam block to fit the weapons in the pocket. It was it has come with what looks like a shoulder strap for a gun, I’m not exactly sure what this is for I will go over the instructions. I will let you guys know in the next or later in the review what this is actually for because I’m curious myself.

And then the final thing he comes with is his hands. I don’t go into that much detail, usually with these. The only reason I’m mentioning these hands is that there is a fascinating sort of pale-ish color with a pink hue to it, which is interesting. It does kind of suit the color tone of the film. I thought I just quickly note that.

That’s pretty much it for Neo’s accessories what we’re going to now is get the figure himself out here and take a look at that head sculpture.

Now in terms of the Keanu Reeves likeness, I think they nailed that likeness. He looks good, especially with the glasses on.

When you take the glasses off, he still looks equally as good in my opinion. Except for some reason, the glasses make it. I guess that’s just down to the fact that this is Neo obviously from the matrix, and it is just part of looking for the character.

The way that the glasses sit on a little bit is interesting there. This sort of half arm design doesn’t require hook over the ears. It just sorts of rests on-ear. I think it works well. They’re so damn shiny that you can see me in the reflection there.

Be careful with the black on the coat and the long-sleeve shirt underneath, because it could always stain the figure, so definitely do be careful.

Taking a look at the actual outfit itself, you can say that it just pretty much is a black long-sleeve shirt, and he is wearing a harness underneath there. You can remove this jacket for an ultimate look. I will do that in just a second, to give you a sort of different look for the figure. Towards the end of the film, he ditched the jacket, and he was wearing a long-sleeve shirt. You can see that the jacket fits very nicely, and it does have that sort of silhouette from Neo in the Matrix.

The rest of the outfit is equally well done, in my opinion. I think the boots are a huge standout, I love this sort of mesh section that they put on the top there, in fact, in the film it zooms right in, so I’m glad that they did nail that. This boot is a leather sort of piece with all the straps and buckles and everything I think they have a ton of marvelous job with these boots, and there is a real standout for me; they look good.

The jacket itself does have a wire in the bottom so you can get some nice flowing poses to go all the way around and down the floor. You can get some awesome dynamic flowing postures with the cape. Still, with the coat when he’s posed upon his dynamic flight stand, you can have him somersaulting around. I think that the coat is going to look very, very good in those dynamic poses.

In terms of an ultimate look for Neo, I think this looks good. I have removed the jacket, I’ve left the harness and everything on it. You can remove the equipment, but it’s a little bit tricky to do so because you can see there’s a lot of strapping going on here. There’s a lot of sort of belt work that you have to undo. I think this does convey the right message having the jacket off. I’m temp to display him without the jacket because he looks so damn awesome. He is standing just here in this long-sleeve shirt. I think it looks good and having him displayed just only without any weapons. Just standing there, he’s nice and heroic. I think it works well for the character, and it works well for the figure.

Getting a look at Neo all armored up, you can see that he looks excellent with all of the guns attached. I managed to incorporate as many I possibly could, and the instructions do tell you where to put each weapon itself. These strapped from the accessories segment is used to hold both MP5s, it connects the back of each one and then goes around his neck, and you can tuck it in, so they hang by his side. I think it looks great, in fact, I think they’ve done a perfect job incorporating the weapons. They had the film base on where to put the guns, but the fact that the figure can hold it or put them all in the various places, I think it works well. You can slot the guns into the actual holsters there. They do prohibit his arms from going down. That is something to consider when you are holstering all of Neos weapons. Still, I think this is a look that a lot of people are going to have on display.

I am just wrapping up on this matrix neo figure. I am so glad that I picked up this figure, it is incredible, I mean, if you are looking for that classic 90s figure in your collection, this is the one to have. It is fantastic, the amount of stuff that it comes with and the posing possibilities. This guy is an absolute goldmine for posing. This one right here is just about my very favorite pose to put this figure. Please like and comment, and I’ll catch you in the next review. 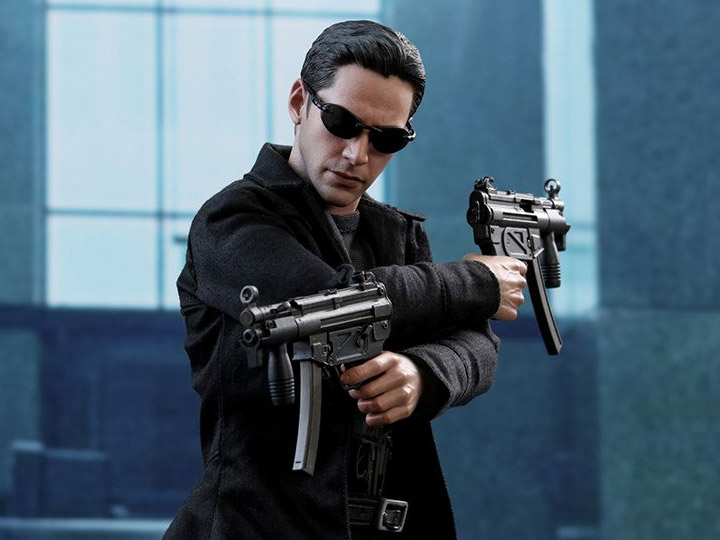 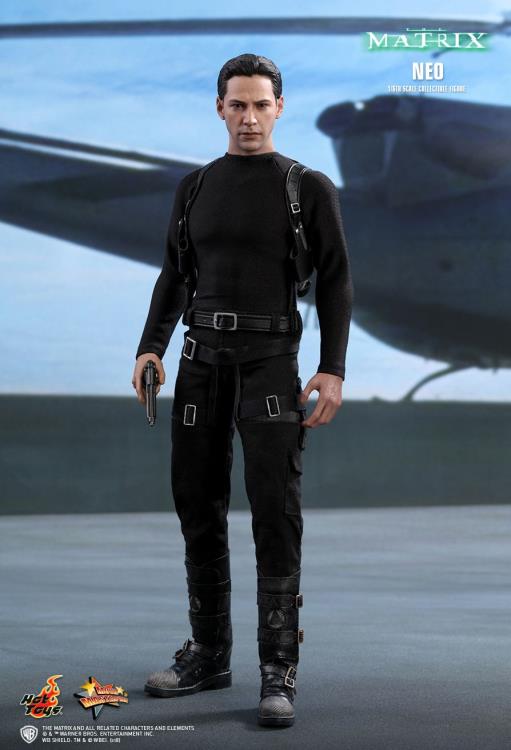 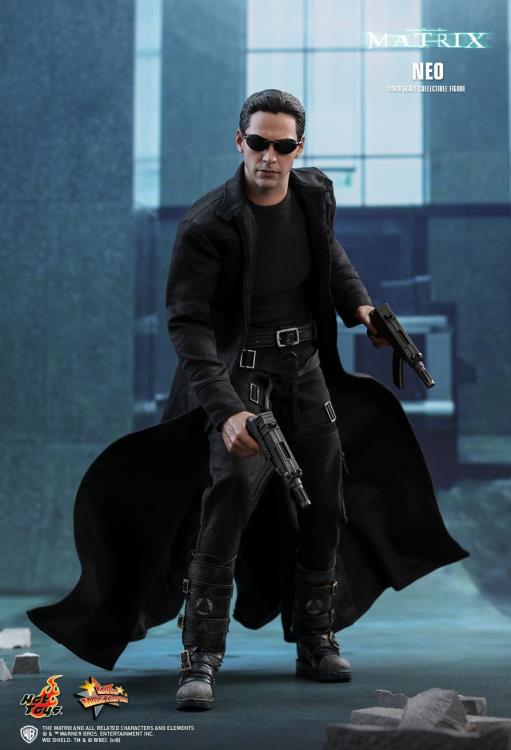 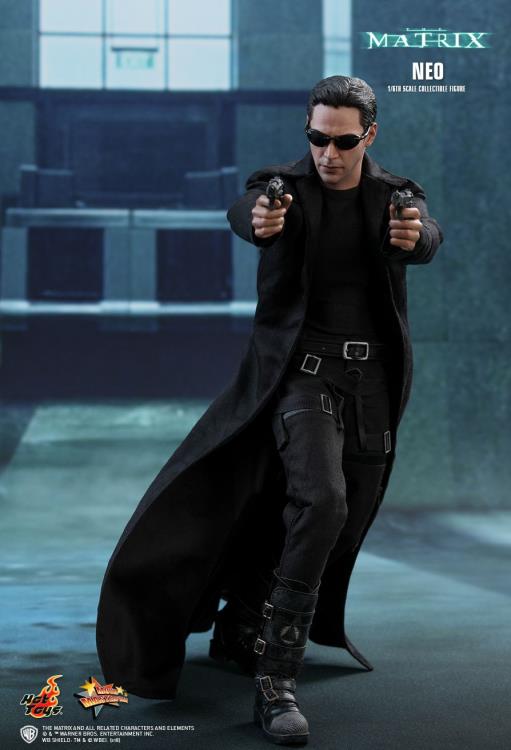 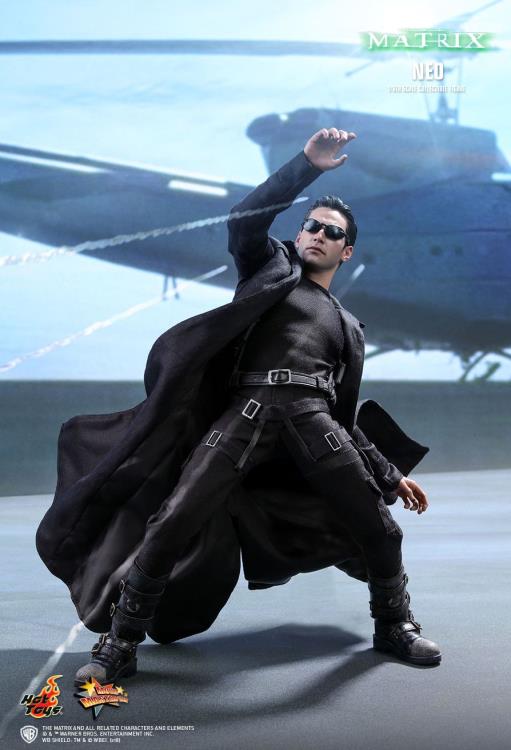 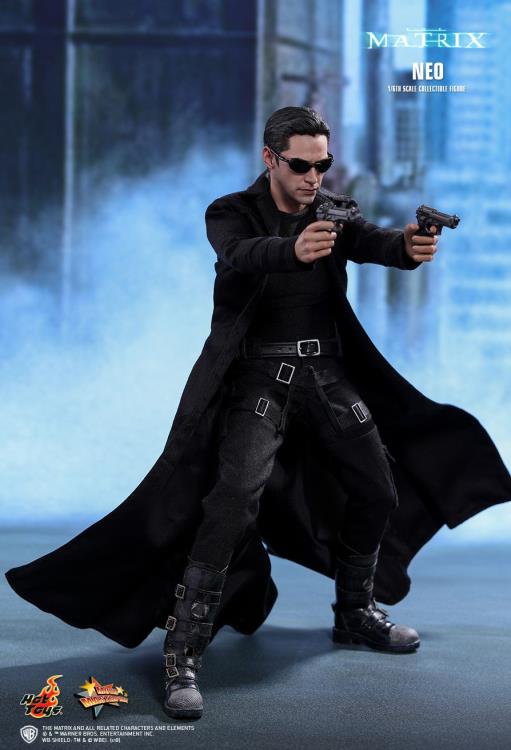 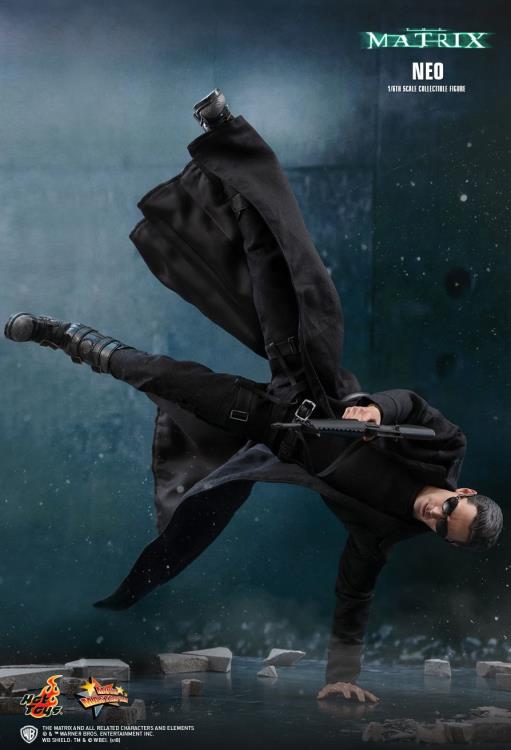 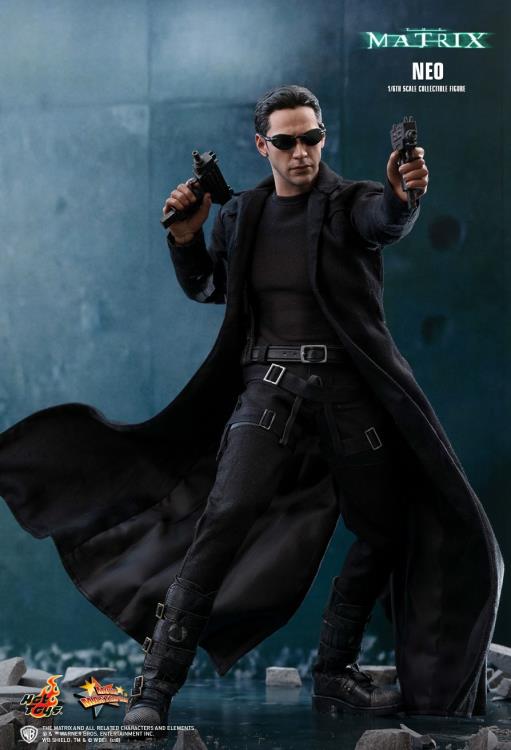 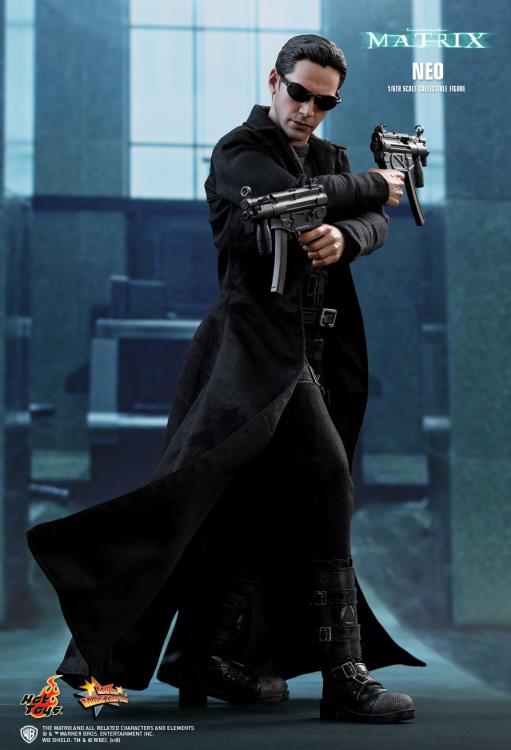 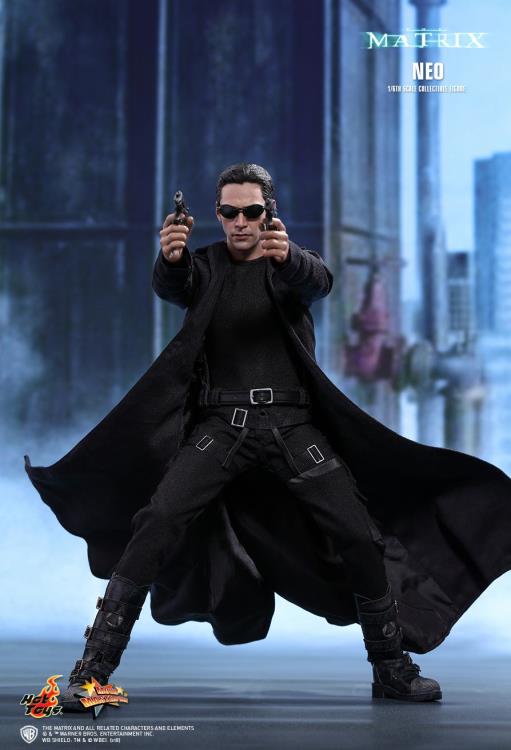 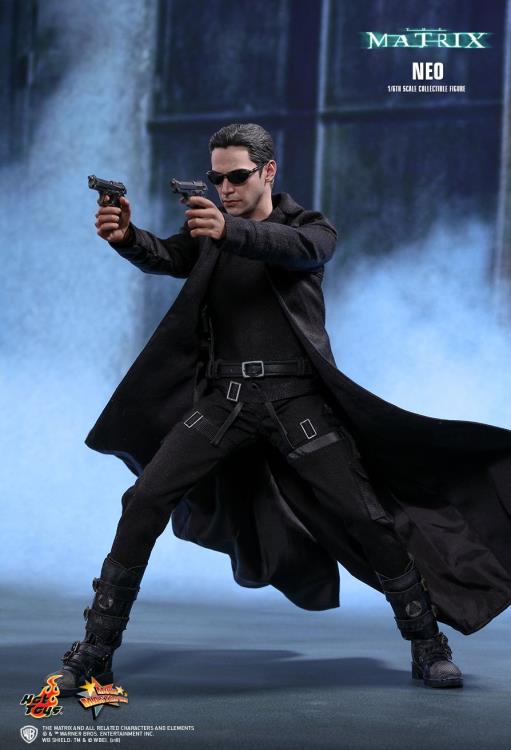 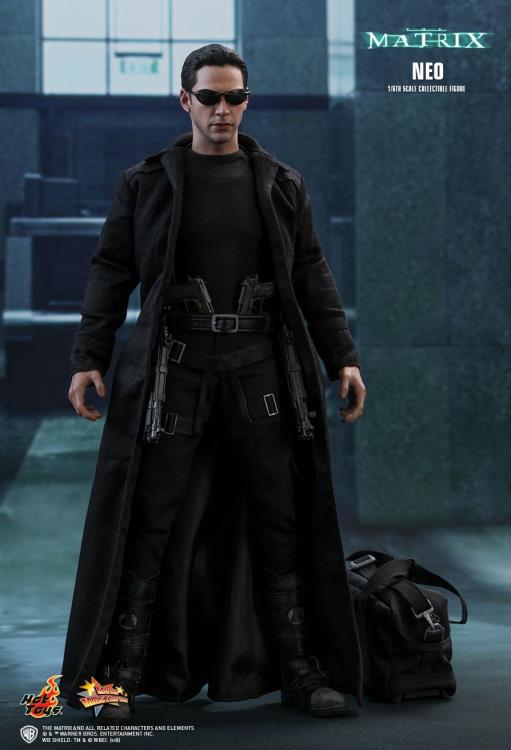 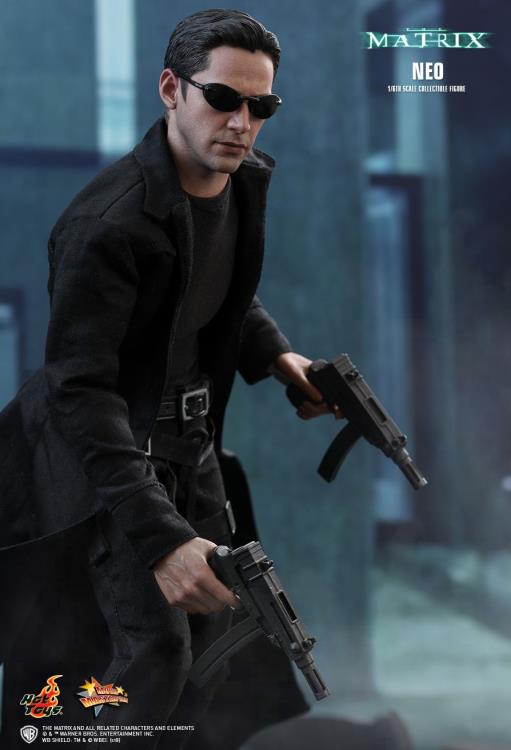 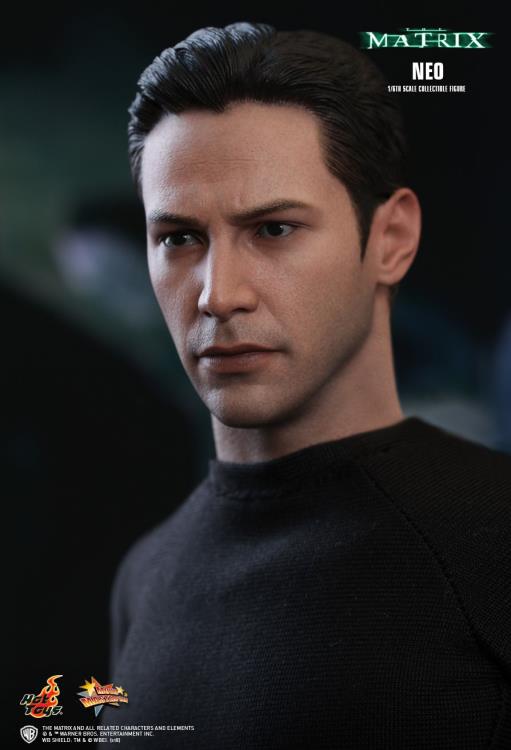 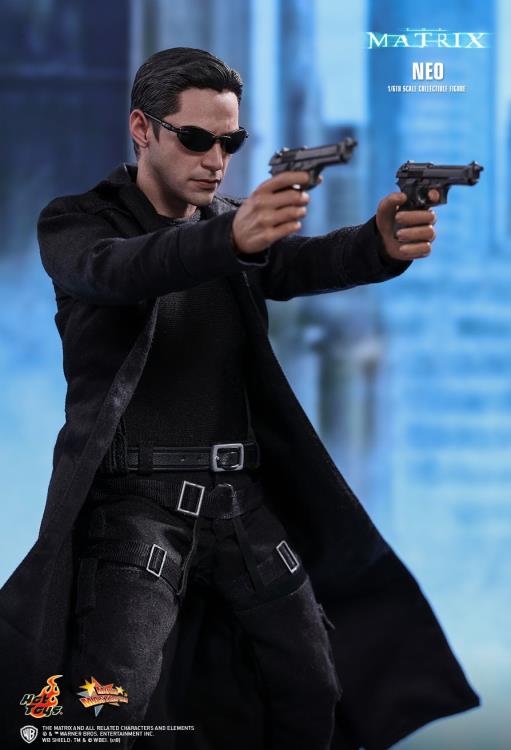 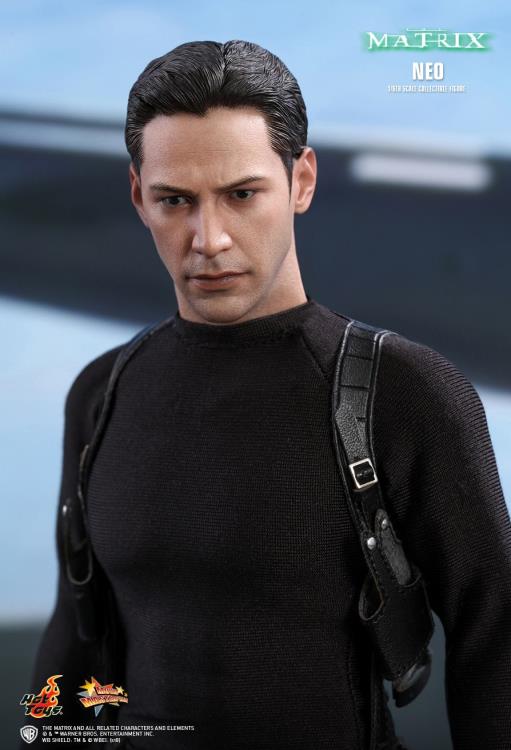 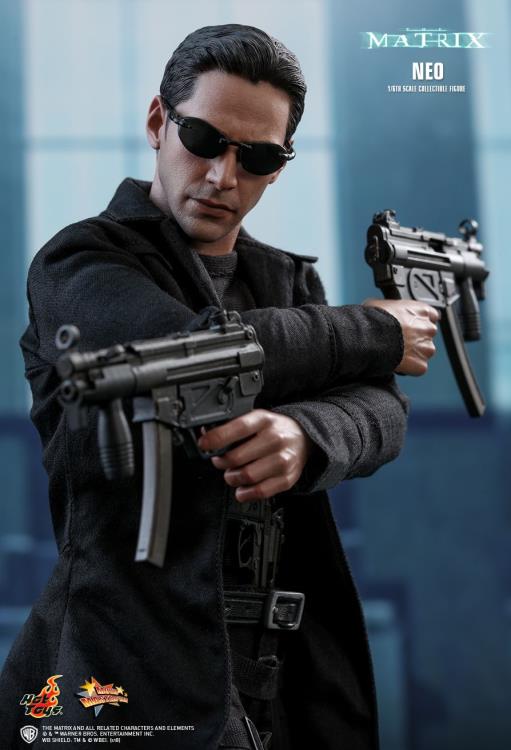 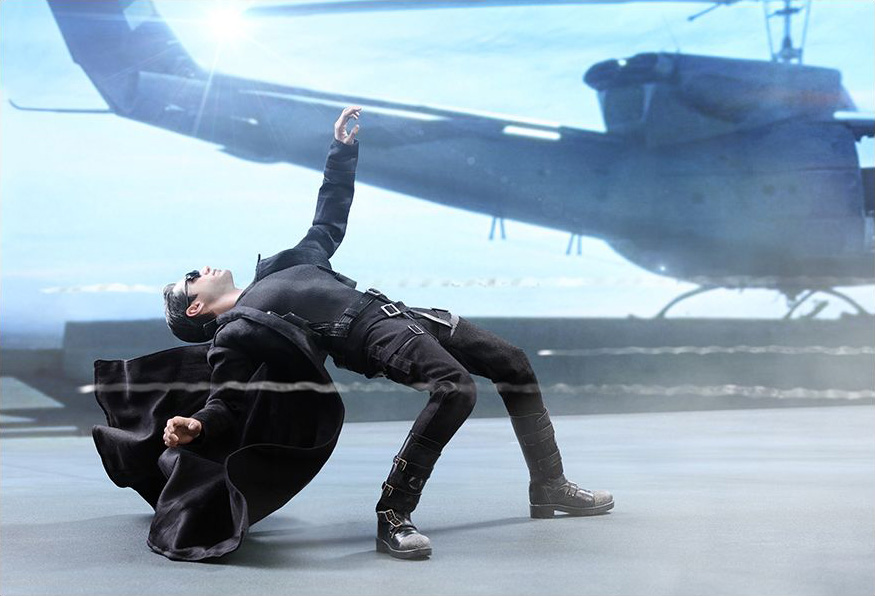 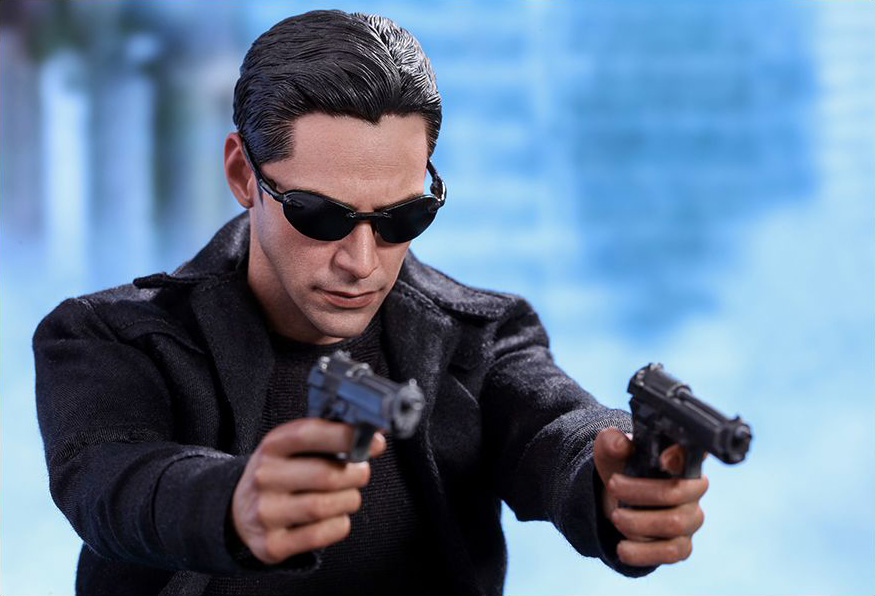 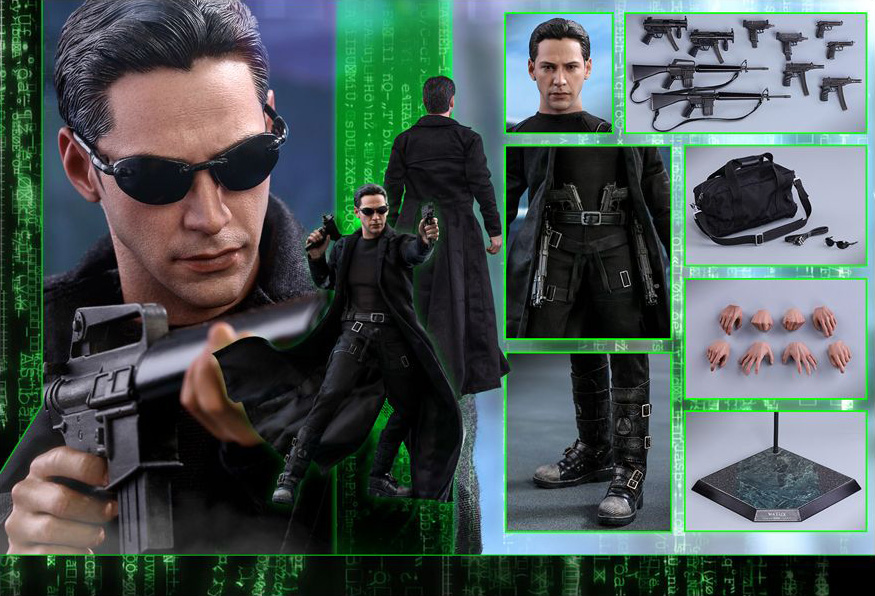 In the binary world with one and zero codes, are you a zero, or The One? The legendary and widely acclaimed Sci-Fi blockbuster The Matrix has created a tremendous impact on cinema and pop-culture with its concepts and characters. Portrayed by the renowned actor Keanu Reeves and ranked as one of the greatest movie characters of all time, Neo is foretold by the prophecy to be “The One” who can put an end to the war between humans and machines and free humanity.

Welcome to the Real World. Forge your love for this monumental Sci-Fi blockbuster by adding this incredible 1/6th scale Neo collectible figure to your collection, this is an offer you definitely shouldn’t pass up!

I've been collecting for as long as I can remember, but one thing has always been missing. I've never really had an outlet where I could share this amazing hobby and my collection with other collectors.