Hello everyone, and welcome back for another showcase review. Today, we have the Hot Toys MMS 500 Iron Man Mark VII from The Avengers. Now, I gotta say just right away, that hot toys have absolutely killed it with this release. They’ve really made their 500 MMS figures something extraordinary.

This figure has so many display options, and we will be going through each one of them in this review. Before we get into the figure itself, let’s quickly go over the box, and even this box art is looking awesome.

The shipper that it comes with has an Iron Man theme to it, which was totally unexpected and have used black foam instead of the traditional grey for the inner packaging. I feel this is a change for the better. Still, enough about all that you’re here to see the figure, so let’s get them out here.

Here is the one and only Mark VII diecast standing up like you’ll have him straight out of the box, so this is what they’ve called the normal mode. Hence, what you see here is what already comes on the figure in the box, I haven’t swapped anything out yet and look at it it is looking absolutely perfect. It looks just like how he did in the film Hot Toys. I’ve recreated it so damn well, and during my unboxing, this was probably the most hyped of being for a figure, since the Mark 50 dropped.

Now taking a closer look at it, you can see all the details that hot toys have recreated in this guy. I love these subtle bits of scratches and scuff marks, and there’s even some oil stain type of weathering as well.

We might as well talk about the paint color controversy. Personally, I like that it’s not as glossy as what hot toys have usually done, more importantly, the paint wasn’t shiny in the film as well. It had more of satin quality to it, and hot toys have replicated that here. If anyone is concerned about whether or not this comes across as plasticky, don’t worry because it totally does not.

Quickly before we get back into the figure, I want to go over the base. It is a reuse from one of the Terminator figures, I think. I do like the road diorama; it fits really well with the Battle of New York. The bullet casings do seem a little bit out of place. Still, it is really well done, the texture is excellent, the paint application is good, the only downside is the random bullet casings.

Here we have the mark VII in attack or missile mode, and he looks like an absolute badass.

Here are the parts needed to swap for turn him into attack mode. It’s relatively straightforward. What you’ll need are the shoulder missile pods, a fire missile armor four-arm missiles, and if you want to equip the little laser cannon on his hands, you’ll need to swap out the forearm armor as well. This is one of my favorite display options because it made him look like a weapon, and coupled with the bulkiness of the suit, it makes for a terrific display option.

Hot Toys have also nailed the details on these pieces, so everything is sharp and crisp, they’ve really taken it to the max for this figure.

For the second last mode, we have the battle damage mode. Here are the parts needed, also, it’s quite simple to do the damage on the chest, and the shoulder armor is a little soft, I’m not gonna lie about that. To me, there is a bit of a color mismatch between the damaged bow pieces and the actual paint on the figure itself.

Personally, I don’t think I’ll be displaying him with this look just because it loses so much of the bulkiness that the Mark VII has.

Taking a closer look at the head sculpture. I have no words, this is just perfect. There’s no denying that that is Robert Downey Jr. in there, they’ve replicated the skin texture so well, and the blood effects look really lifelike. It’s been a while since we’ve gotten a helmeted RDJ head that’s for sure. There are also several intricate parts on the head, especially around where the mask would go. You’ve got some thin sections on there, so do be careful when handling it, and just like before, the mask is magnetically attached.

Finally, we have the suit pod mode here. This is a very, very special display option because it’s never been done before. Honestly, Hot Toys didn’t really have to do this. Still, they did it anyway, and I give them huge props for that. I will say that this is very complicated to convert. Honestly, it’s a bit of a hassle, especially if you’re a person like me who doesn’t really like to pop off arms and legs.

Here are all the parts you’ll need, and there is a lot involved in this conversion process. Hot Toys has done a video guide on its own YouTube channel on how to assemble it in-depth. So, I won’t be showing that process what I will say though is that the legs came off surprisingly easy on mine, it was the arms that gave me the most trouble.

And the end result looks pretty good, I gotta say. It won’t be something I will be displaying, though, because I’ve only got one of these. If the figure in the pod mode, I don’t have a standard Mark VII to display next to him, but if you do plan on getting two of these, then, by all means, go ahead with the suit pod conversion. There is also an advanced mode where you can put the arms on the pod as if the pod was actually getting ready to suit up on Tony.

I also want to go over articulation quickly. During the pose, I’ve utilized some of the features that allow this figure to articulate so well. I’ve extended the waist and pushed down the legs. I’m a huge fan of these features when you want him in a museum pose, you just unexplained the waist push up the legs, and it looks completely natural. When you want to go dynamic with the pose, you do the opposite, and you can still get a large range of motion.

Because this is the special edition, he comes with this little hologram of the suit pod. It’s great for people who have the other holograms, so they can continue their mini collection, and this is actually my first one. Hence, I’m pleasantly surprised at how detailed it is, plus you can always display this next year Mark VII as a nice little bonus piece.

Overall this figure totally lives up to the title of MMS 500. It is a masterpiece, and the concerns about the paint color, in my opinion, are non-issues because that’s exactly how it looked in the film. I think if you’re a Marvel or Iron Man fan, this is a must-have. Even if you don’t have the complete Avengers one line, like me, this figure works great as a standalone, since it just has that much presence to it. With all the display options, you’re definitely getting your money’s worth, and it’s just so fun to switch between the modes attack bow damage. To an extent, suit pod mode does a bit fun, but the only tricky thing was popping off the arms on line.

So guys that’s the review, let me know what you think in the comment section below, will you be getting this figure? I would love to hear your thoughts on that, I’ll see you in the next review. 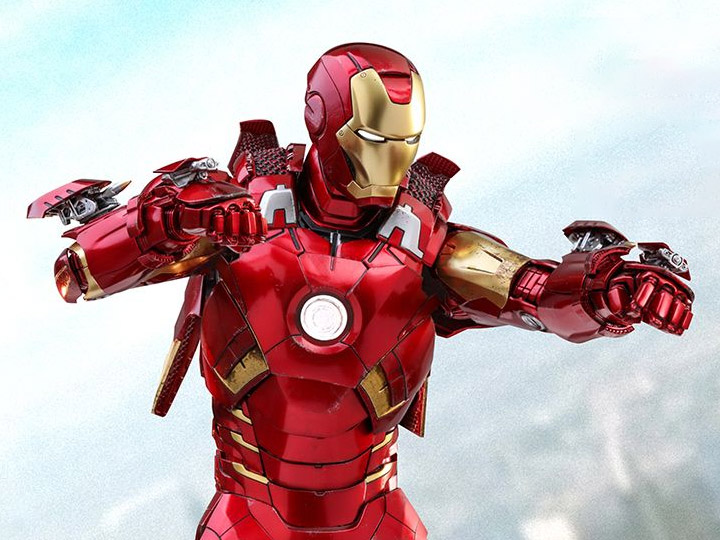 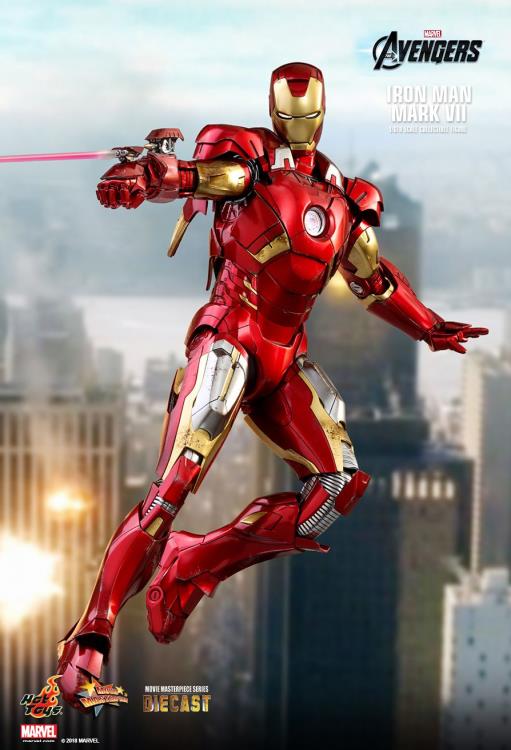 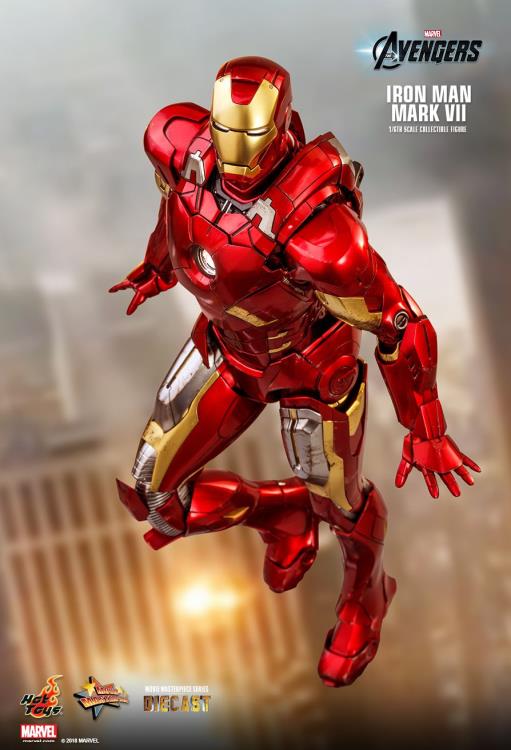 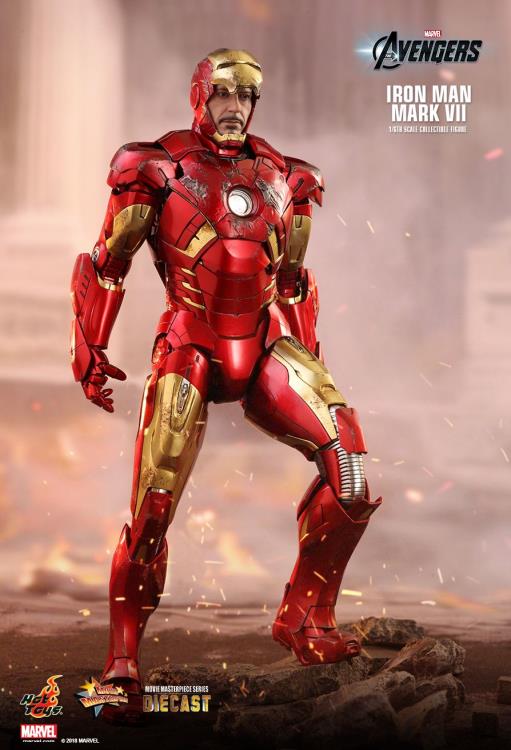 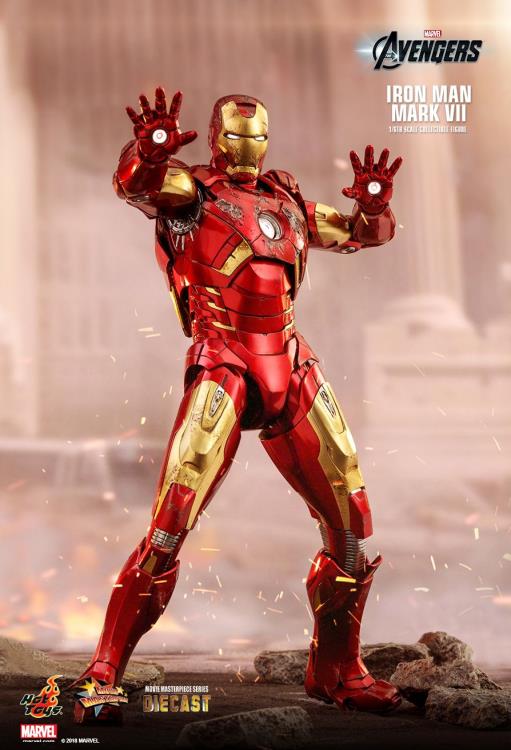 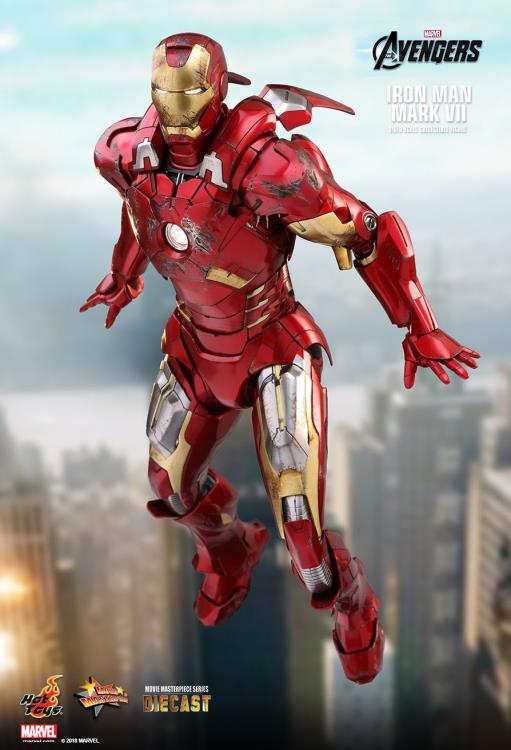 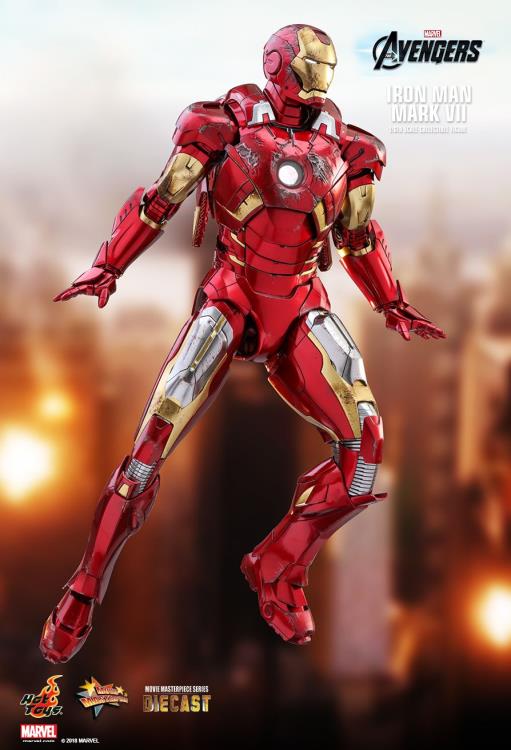 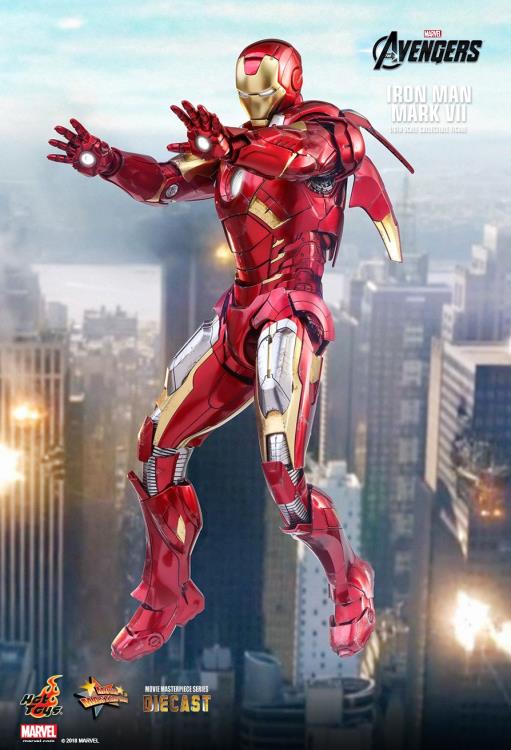 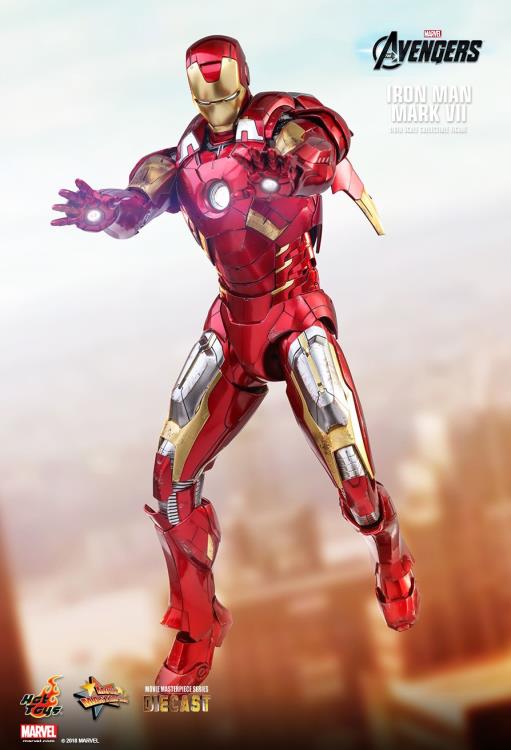 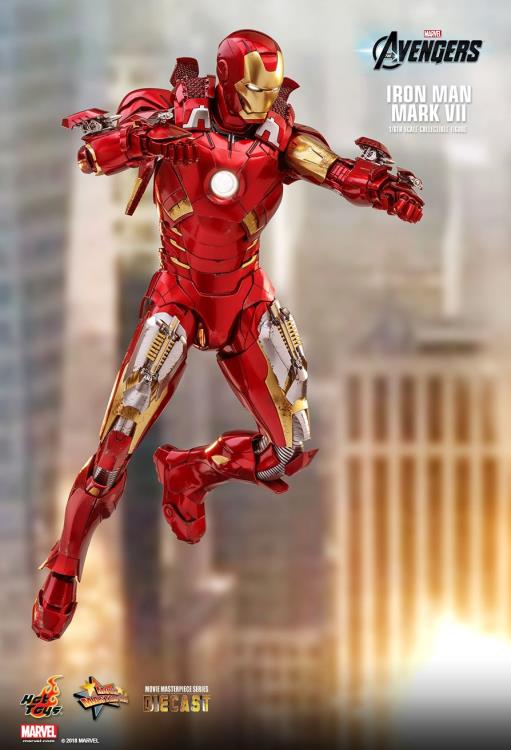 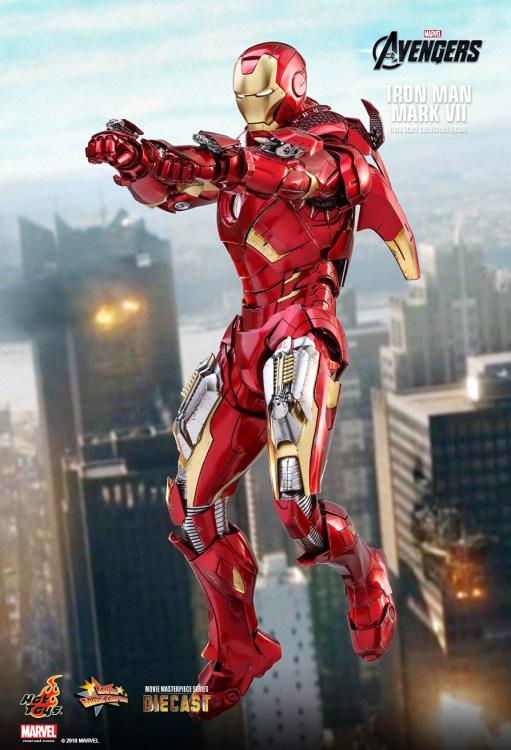 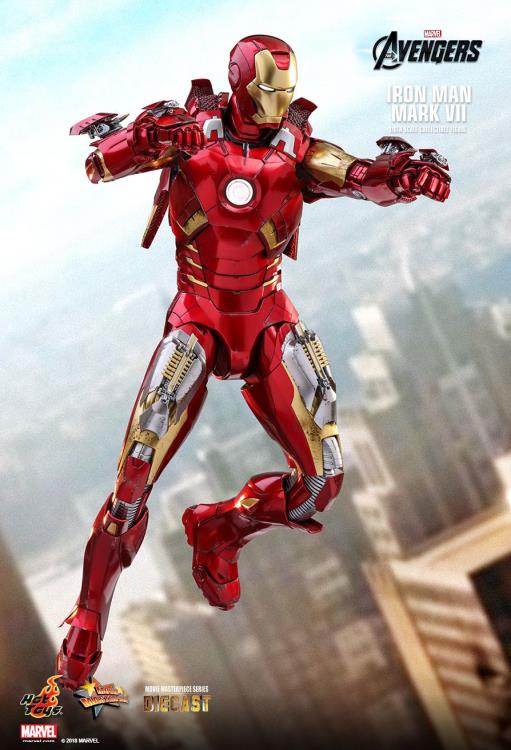 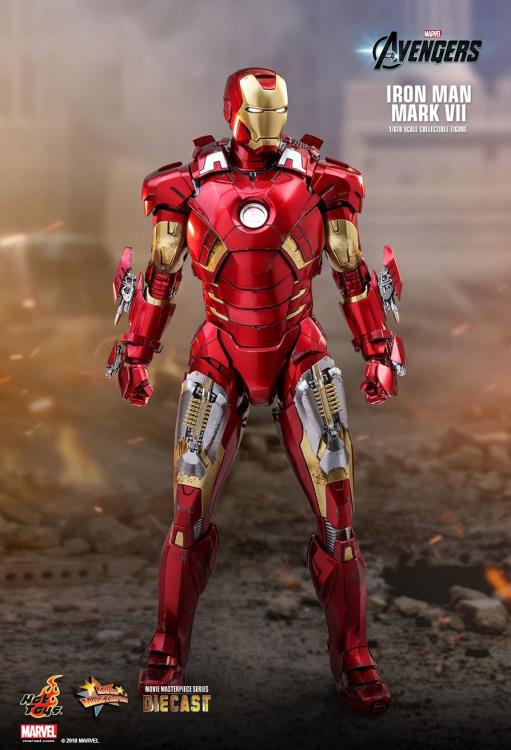 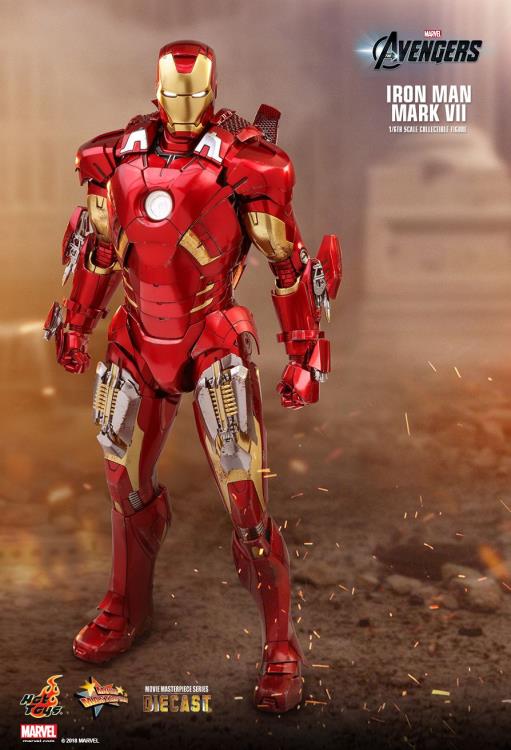 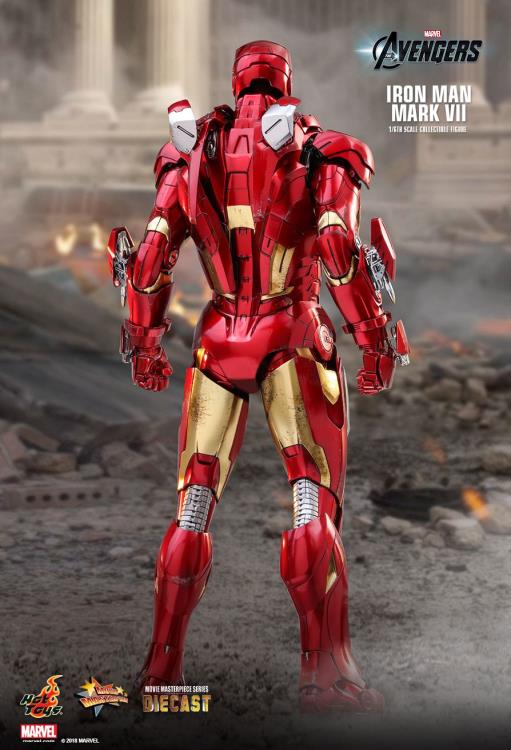 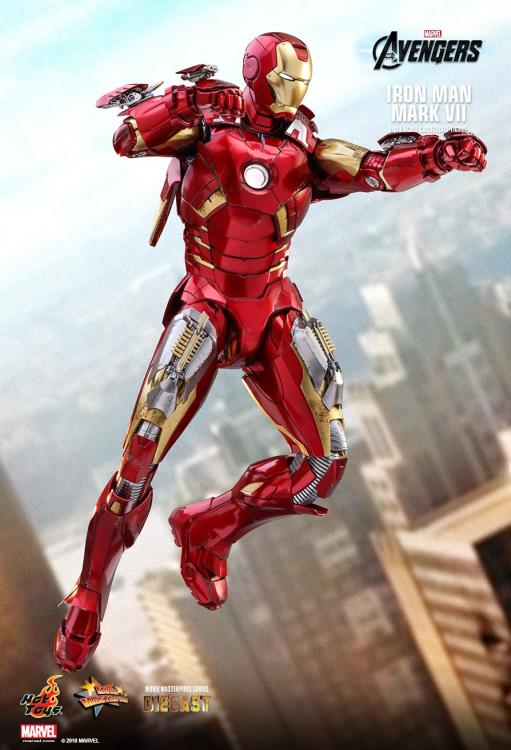 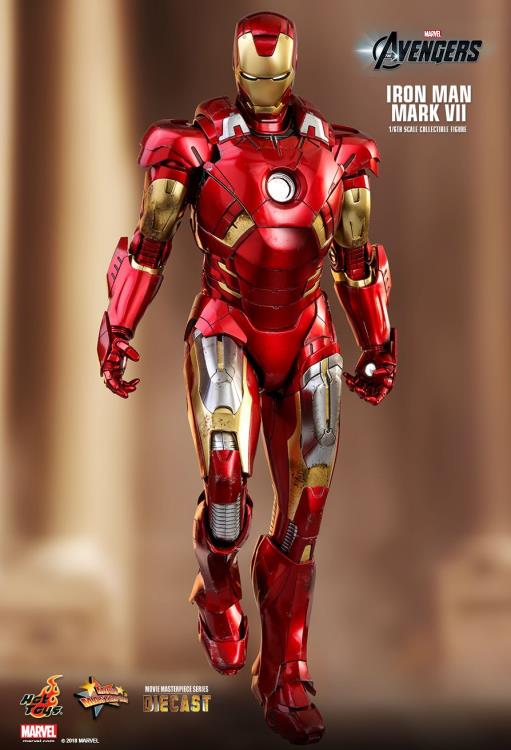 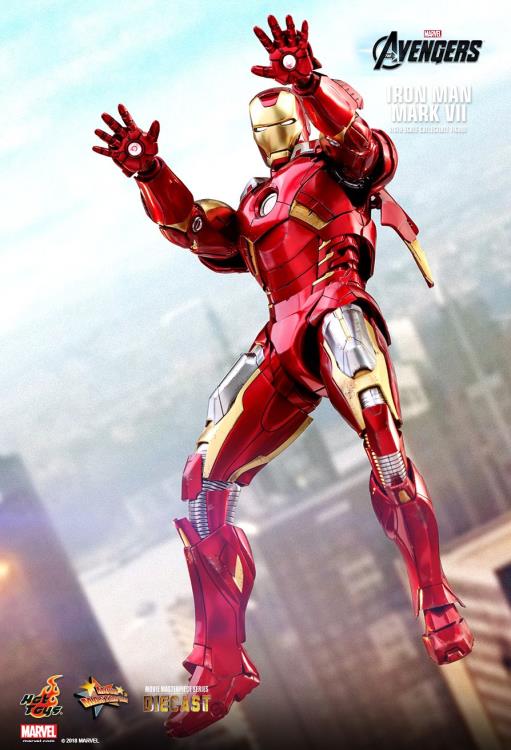 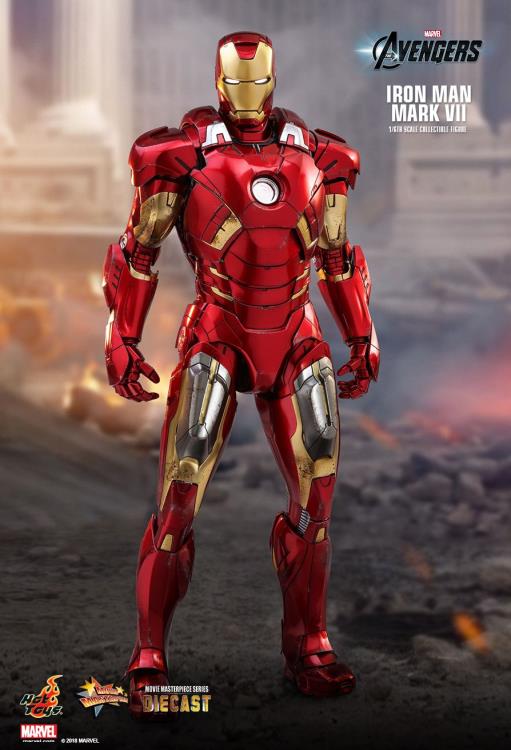 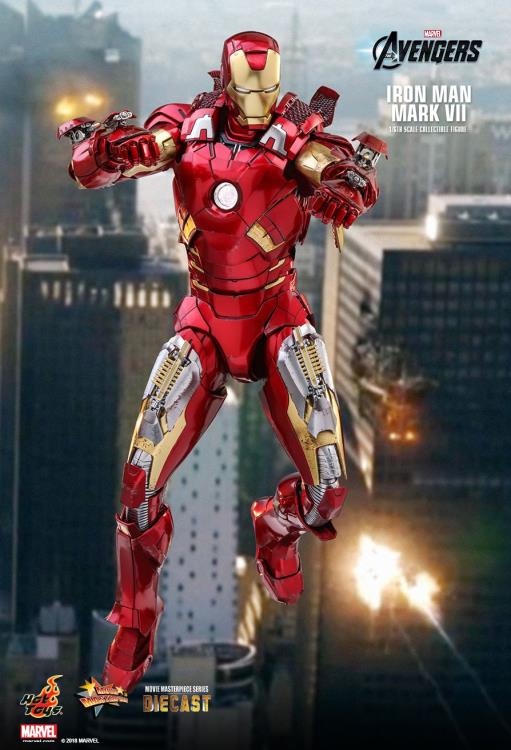 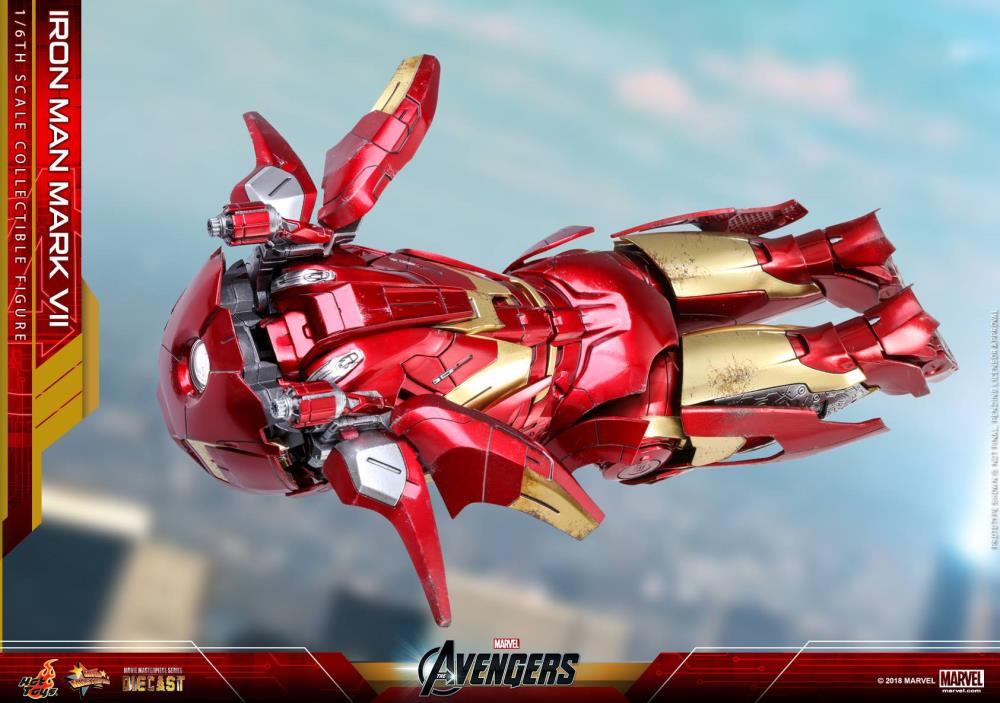 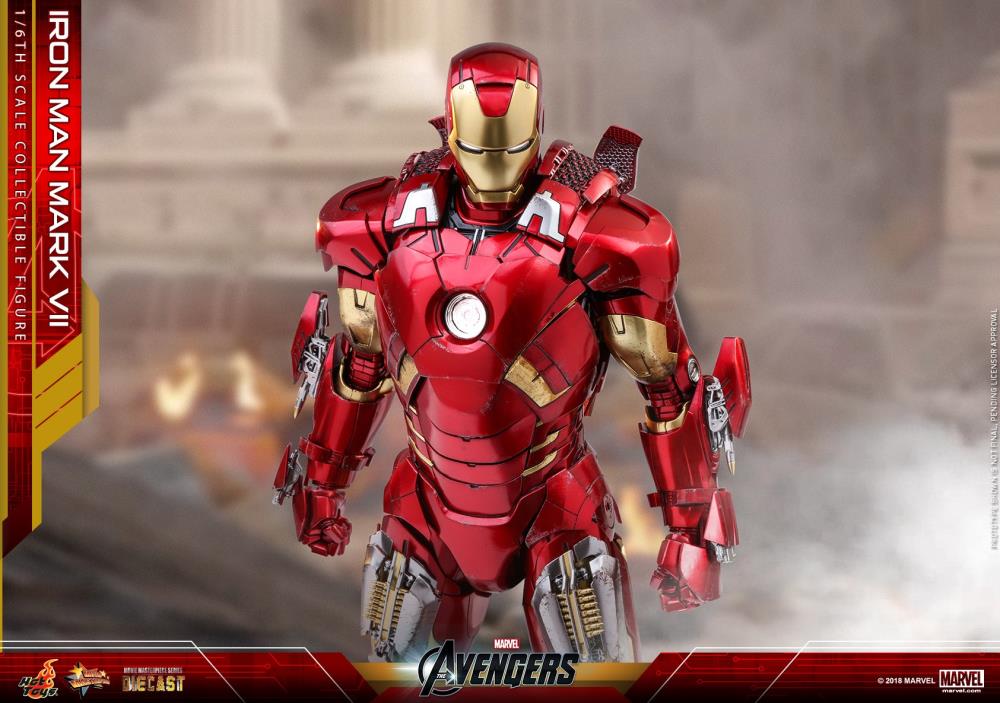 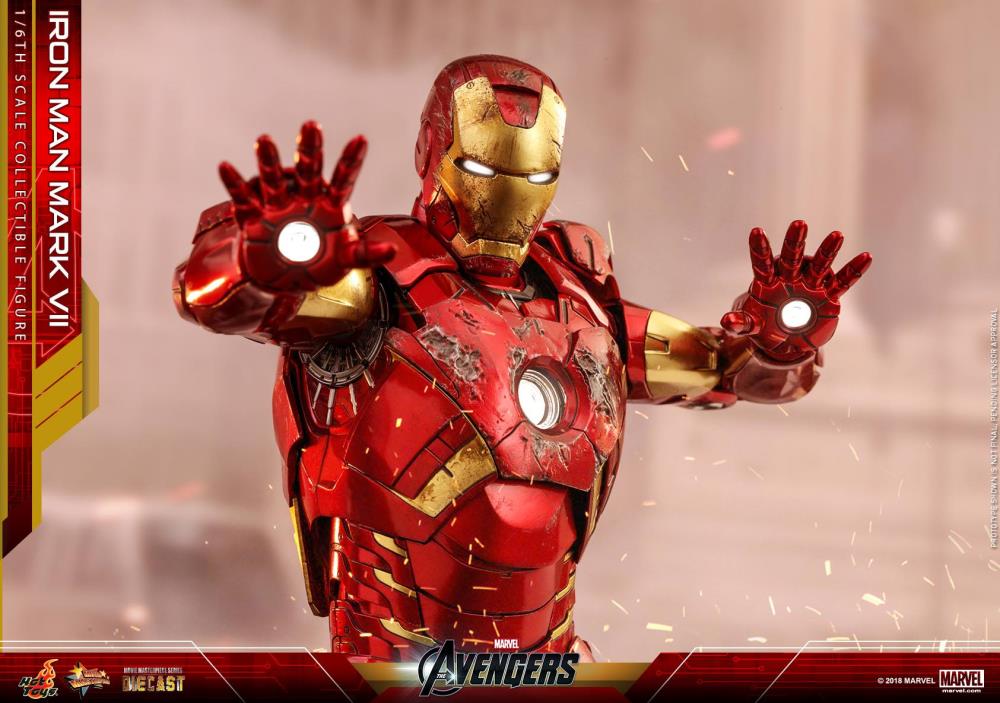 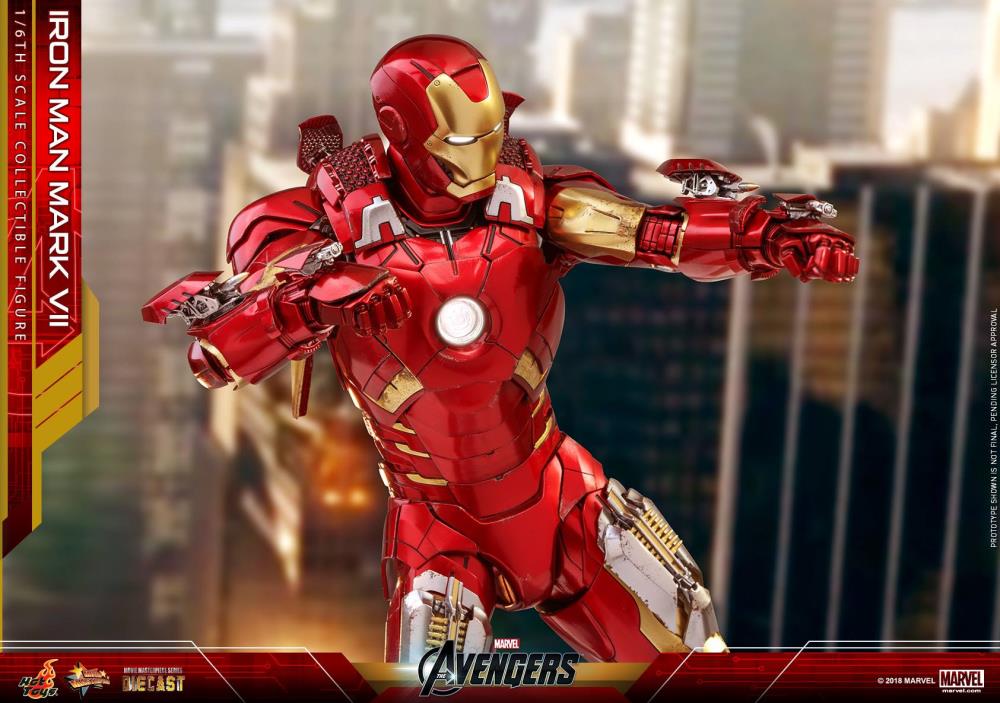 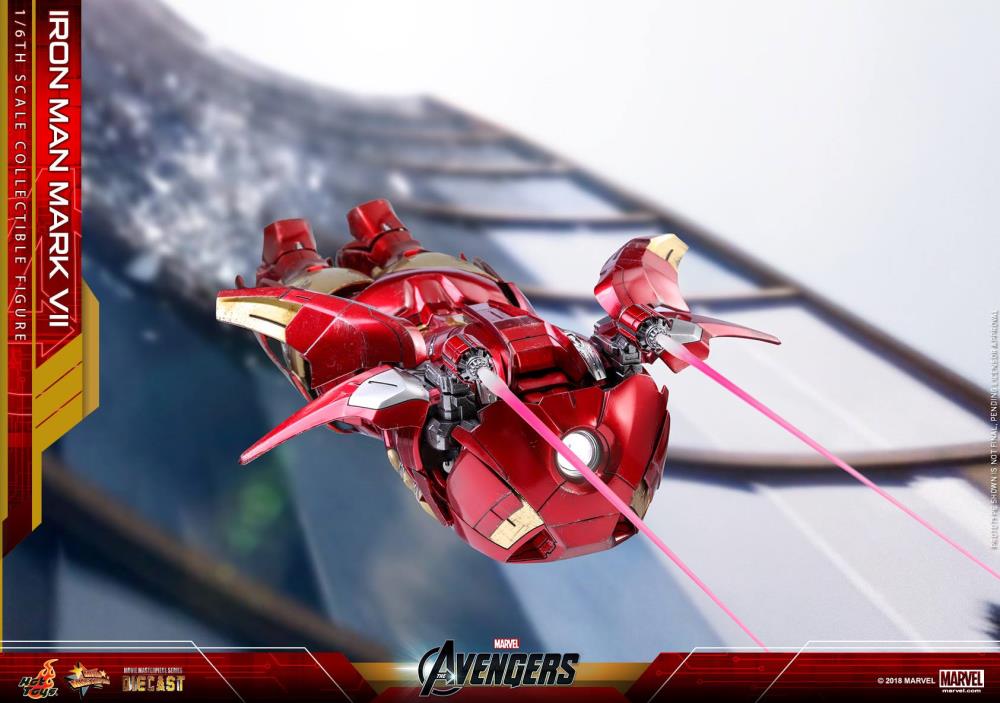 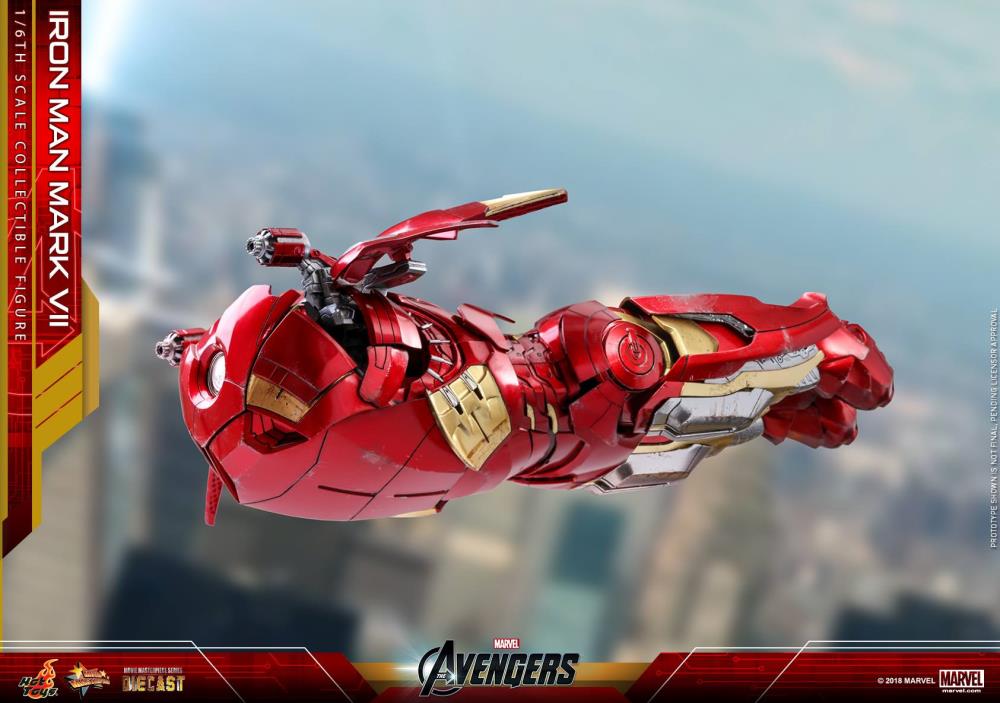 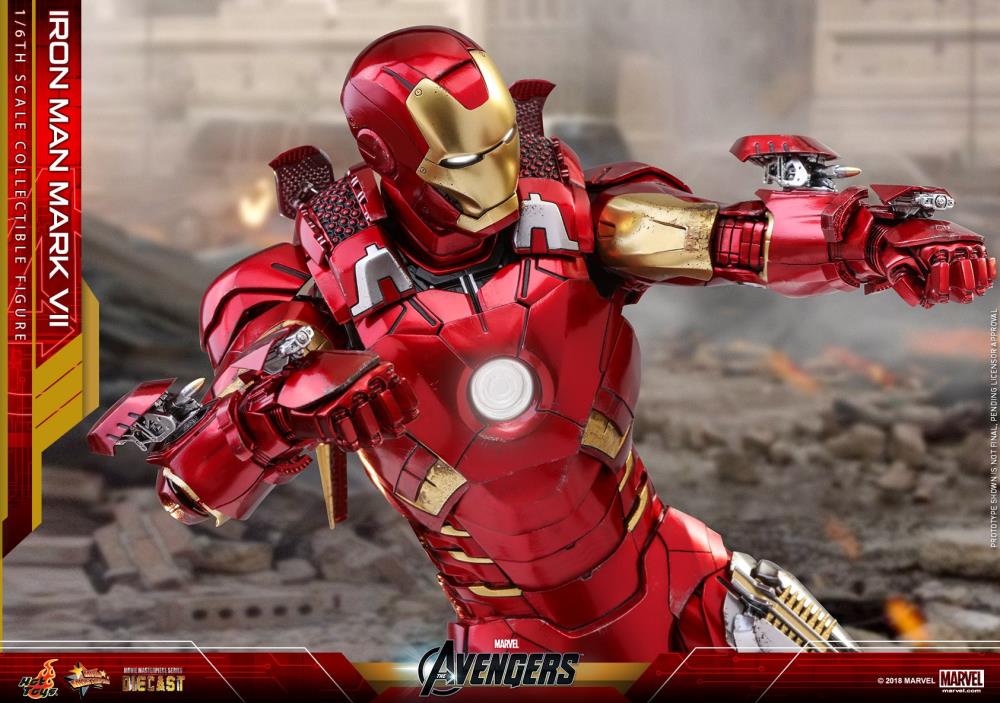 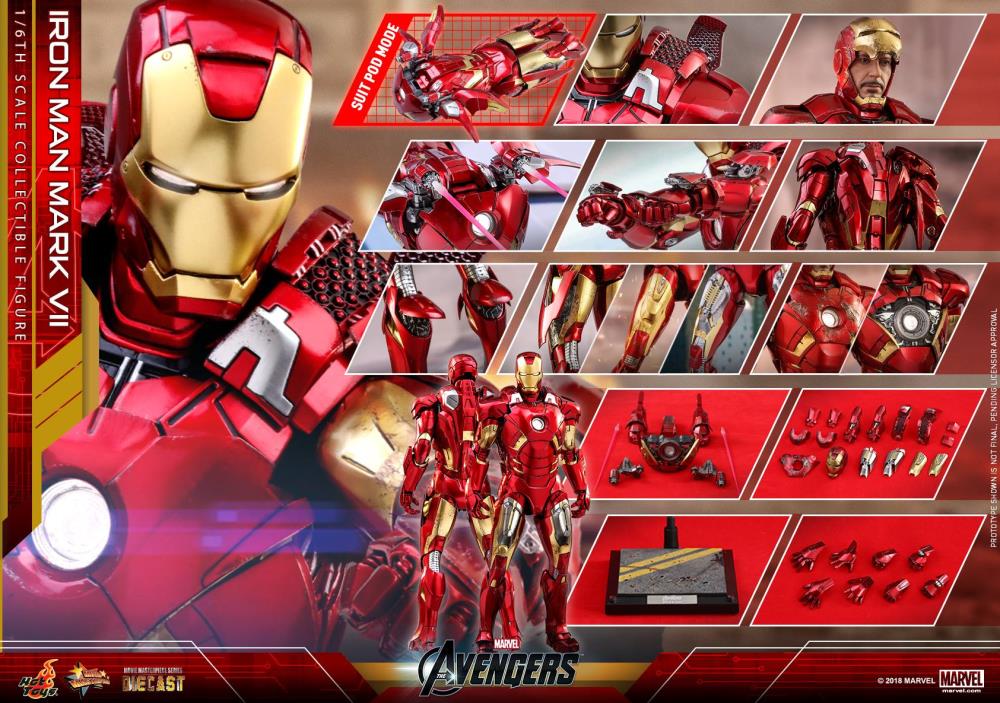 The designs of Iron Man suits have always fascinated fans all over the world with its incisive geometric forms and innovative designs. To celebrate the 500th creation of Movie Masterpiece Series, Hot Toys is delighted to officially present fans the diecast version of the iconic Iron Man Mark VII 1/6th collectible figure from The Avengers by Marvel Studios. With a more masculine, more progressive and a distinct exterior design, the integrated Suit of Armors promotes its beautifully engineered features that surpass its predecessor.

Inspired by one of the jaw-breaking scenes that presents the suit launching to wrap around Stark momentarily, this Hot Toys Iron Man Mark 7 successfully recreates the complicated yet distinctive alternative form – the large suit pod. This 1/6 scale Iron Man figure is also the first time that Hot Toys adopted the dynamic armor forms in its one-of-a-kind collectible figures, and it is surely a visual highlight that Iron Man fans have been longing for.

As one of the most popular armors in Tony Stark’s arsenal, the screen-accurate 1/6th scale Hot Toys Iron Man Mark 7 is made with diecast materials and expertly crafted based on its appearance in the movie. The approximately 32.5cm tall diecast figure features a newly painted head sculpt of Robert Downey Jr. as Tony Stark/Iron Man, an interchangeable LED light-up helmet, movie-accurate proportion and substantive detailed armor design with great articulations and the unique suit pod mode, metallic red and gold painting on armor, interchangeable shoulder and forearm weapon-firing armor parts, LED light-up functions on eyes, palms, and arc reactor, as well as a specially designed diorama figure base! Add this 1/6 scale Iron Man to your Marvel figure collection today!